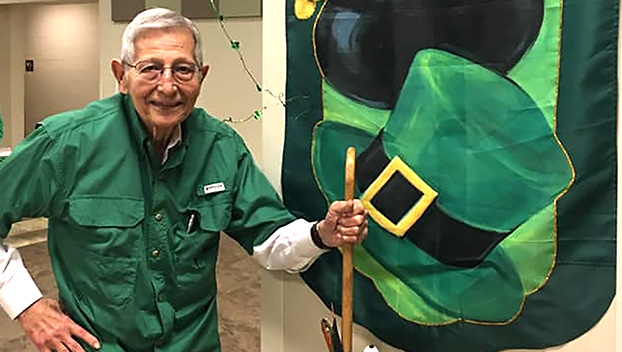 Bob Dearing will be this year’s St. Patrick and lead the annual parade down Main Street. (submitted)

NATCHEZ — Sen. Bob Dearing said he was thrilled to learn he had been tapped to serve as St. Patrick in this year’s Krewe of Killarney St. Patrick’s Day Parade that will roll at 6 p.m. Saturday down Main Street.

“That really surprised me when Tony Byrne called me,” Dearing said, adding that Byrne had originally asked him to serve in the role next year. “I was looking forward to next year, and then something came up and he said, ‘Would you like to be St. Patrick this year?’ I said, ‘Well sure!’”

As St. Patrick, Dearing will lead the Krewe of Killarney parade starting at 6 p.m. Saturday in front of the St. Mary Family Life Center on Main Street and proceeding down Main Street to the Natchez bandstand on the bluff.

There on the bluff the Rev. David O’Connor, pastor of St. Mary Basilica, will say a few words about St. Patrick’s Day before Dearing will make a speech and symbolically banish the snakes from Natchez.

“It is quite an honor,” Dearing said of being named St. Patrick for the Krewe of Killarney’s 29th annual parade. “I’ve been marching in the St. Paddy’s parade for a mighty long time — never in my wildest imagination did I think that I would ever be St. Patrick. As the old saying goes if my shillelagh chases the snakes into the river, it is going to be the highlight of my evening.”

Dearing said he has Irish lineage.

“I’ve got Irish in my background…” Dearing said. “Actually, my daddy was Irish. My mama was Scot, so I’m Scot-Irish.”

Dearing, 84, said he would ride in a friend’s golf cart to lead Saturday’s parade.

This has been a year of parades for Dearing, who recently announced his decision to retire and not seek another term as a state Senator after having served in the District 37 position for 36 years.

Earlier this month Dearing served as grand marshal in the Krewe Phoenix Mardi Gras parade, a role he said he enjoyed, and he also is excited about leading Saturday’s St. Patrick’s Day parade, which Dearing said he always enjoys.

“The streets are pretty well lined with folks and the parade moves slow because everyone is walking, and they are tossing beads and tossing candy and stopping to shake hands,” Dearing said of the annual St. Patrick’s Day parade. “It is just a fun, fun parade.”

Dearing said he appreciates the opportunity to participate in such parades, and it is especially meaningful as he nears his retirement.

“I’m going to miss serving,” Dearing said, “no doubt about it, but 36 years is pretty good time to serve. We passed some good legislation, made a lot of friends, good lifelong friends, in the Senate and outside the Senate as well. I’ve enjoyed almost every day. There have been a few days that didn’t go quite like I would like for them to go. Otherwise, it has just been a wonderful experience. I look forward to congratulating whoever the next senator is for Senate District 37 and wish them well.”

VIDALIA — Even though one could hear the sound of the waves lapping, Monday afternoon was no day at... read more