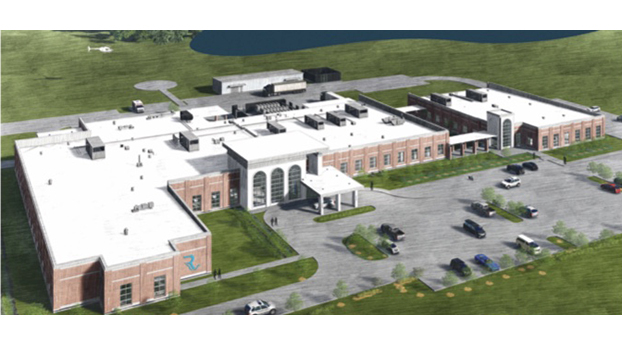 An architects rendering shows what Riverland Medical Center officials hope the new hospital will look like. The new state-of-the-art facility will be on an approximately 20-acre lot in east Ferriday off of U.S. 84, in the vicinity of Marsala Beverage of Ferriday, 6647 U.S. 84 and Camelot Leisure Living, 6818 U.S. 84. (Submitted)

“The 61,000 square foot hospital, consisting of 21 patient rooms and a 17,000 square-foot medical office building was designed to offer a new model for rural health care delivery,” officials said in making the announcement. “It was funded by the USDA, new market tax credits, State of Louisiana Capital Outlay and local bank financing. The construction project is expected to be completed in 16 to 18 months.”

Plans for the construction of a new hospital for Riverland Medical Center have been in the works since last year.

The United States Department of Agriculture approved in August a loan application of $30 million to build the new hospital, Jim Graves told the Concordia Parish Police Jury in October.

The entire project, which will be built on U.S. 84 between Ferriday and Vidalia near Marsala Beverage Company, is expected to cost $36 million, Graves said.

“We have a $30 million loan from the USDA and $6 million guaranteed with the local banks,” Graves told police jurors in October, adding new market tax credits and capital outlay money from the state, would probably, “wipe out the $6 million or get close to it.”

In the event of inclement weather, organizers said, the ground breaking will be moved to Ferriday Hall.