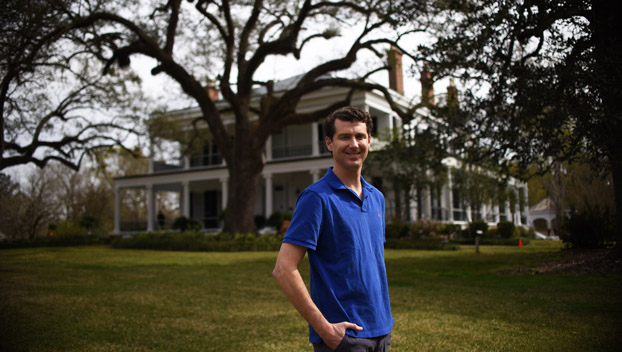 Kaiser Harriss stands in front of Brandon Hall, which he owns and operates as a bed and breakfast with his wife, Ashely. (Nicole Hester, The Natchez Democrat)

NATCHEZ — Several changes to Natchez’s Spring Pilgrimage reflect what may be the beginning of a generational change for the historic house tours.

Two longtime pilgrimage houses will not be featured this year due to the retirements of the houses owners.

Two younger couples, however, have recently acquired a couple of historic Natchez houses that will be featured on the tours, and the new owners are bringing new life to the pilgrimage, organizers said.

“This year we’ve had a changing of the guard,” said Eugenie Vasser Cates, president of the Pilgrimage Garden Club and board member of Natchez Pilgrimage Tours.

“We’ve got Hope Farm, Ethel Banta, being the owner, and Betty Jenkins at Hawthorne retiring — Ethel retired last year. Together they have spanned over 100 years, about 50 years each being on tour.”

In addition, the closure of Dunleith Historic Inn will also impact tourists. Although not traditionally a part of the house tour, Dunleith was open for daily tours until it was closed shortly after a bank foreclosed on the property last month.

Jenkins said her mother showed Hawthorne before Jenkins moved into the house and started showing it in 1960.

“This is the first year I haven’t been on tour for a long time,” Jenkins said. “It feels strange. It feels like I ought to be doing something… I am going to miss it.”

Jenkins said she would miss the camaraderie with the people who used to help her during pilgrimage and visiting with the tourists.

“I’ll miss talking to the people because it was so interesting to see their reactions when they walked in the house,” Jenkins said. “It looks so ordinary on the outside but it is not ordinary on the inside.”

Two factors, Jenkins said, led to her taking Hawthorne off the tour this year — her age and that her longtime housekeeper has had health issues in recent months.

“It is a lot of work that goes in to it and a lot of effort,” Jenkins said, “and I’ve always enjoyed it so much. I just decided this year that I couldn’t do it.”=

Still, Jenkins said, she is confident that pilgrimage has a bright future with some of the younger people taking over some historic houses.

Jenkins said she is not closing the door on future tours for Hawthorne.

“This year, things just weren’t going right,” Jenkins said. “… I’m not saying I would never do it again, for sure.”

Pilgrimage, Jenkins said she believes, is good for Natchez.

“It benefits a lot more people than people realize,” Jenkins said. “The merchants, the restaurants. Downtown today, there are so many people you can’t get a parking space, so it brings a lot of people to town. We think it is good for the economy.”

Pilgrimage being good for the local economy is a point Alana Coons, who purchased D’Evereux Hall last year with her husband, Bruce, agrees on.

“The local economy is fueled by pilgrimage,” Alana said. “I think a lot of people don’t understand how this works. They think wealthy people open up their homes and have a party but it is quite different from that. It is a big effort.

The Coons live most of the time in San Diego, California, where they operate a historic preservation foundation, similar to the Natchez Historic Foundation in Natchez.

This will be the first year the Coons have shown D’Evereux on the pilgrimage and Alana said it is a lot of work, but said she and Bruce are excited and happy to be a part of the process.

To illustrate her point about being beneficial to the economy, Alana points to the number of workers she has brought in to prepare D’Evereux Hall for pilgrimage, including window washers, yard workers, painters, housekeepers and not to mention purchasing hardware and other items.

“It is important that people understand what the perks are,” Alana said, “why people are opening their homes.”

Alana said she and her husband are not rich but that they are “old house” lovers and historic preservation professionals who have restored houses in California, Arizona and other parts of the nation.

Heritage tourism, Alana said, is one of the nation’s top three industries and Natchez is a great place for heritage tours.

Alana noted that the Natchez pilgrimage was started in the 1930s by a group of women to help Natchez’s economy.

“It is important for everyone to realize that this is an economic driver,” Alana said. “This isn’t just a hobby that some rich people do or something. It is really important and heritage tours are almost the third largest industry in the country.”

Alana said she and Bruce were drawn to Natchez because of its uniqueness among historic cities.

“It is not just a gorgeous setting on the river …” Alana said. “What’s here is unique. You don’t see this much well-preserved and protected, and it didn’t happen by accident.”

Alana said Natchez was a forerunner in historic preservation and is one of the best-preserved historic cities she knows of.

“It didn’t happen by accident but by shear love,” Alana said, “by the pilgrimage ladies and garden club.”

Keeping that preservation alive takes new blood and people who appreciate and care for old house and properties, Alana said.

“It always requires new people,” Alana said. “The houses will be changing hands throughout their lives and that is what is happening here in Natchez with several homes and folks are retiring. We’re not young kids (Alana and Bruce). We’re nearing retirement.”

Alana said she and Bruce hope to move to D’Evereux full time after they retire.

“I am 85 and that’s about time to retire,” Banta said, adding that she loved the experience of showing her house for some 35 years.

Another factor Banta said in her retiring from pilgrimage last year was that her longtime housekeeper died.

“I loved showing off this wonderful house,” Banta said. “It is a beautiful place. I loved showing it off, but it is a huge responsibility to go on tour.”

Banta agreed that the biggest change she saw in pilgrimage over the years was a drop in the number of people attending.

Banta said she is encouraged by the new owners of Brandon Hall and D’Evereux Hall and she is optimistic about pilgrimage’s future.

Kaiser Harriss and his wife, Ashley, bought Brandon Hall in February 2017 to operate as a bed and breakfast and they are participating in their third pilgrimage this year.

Kaiser, who grew up in Natchez, left the area to work in corporate finance and study in Jackson, New Orleans and Houston and said he wanted to come back home.

“You don’t realize what you have, until you don’t have it,” Kaiser said of his wanting to return to Natchez, which he said he took for granted while growing up with the city’s history, historic houses, architecture and friendly people.

In running the bed and breakfast the past few years and participating in pilgrimage, Kaiser said he, too, has noticed that visitors are interested in the history of the area, including slavery.

Kaiser said he is working to learn the slave side of the history in order to help educate visitors.

Cates said other pilgrimage members and participants recognize the shifting focus of visitors wanting to know more about the history and noted that projects for education are in the works.

As for the future of Pilgrimage, Kaiser said he believes the younger generation, including Ashley and himself, who are both in their 30s, will keep the pilgrimage tradition alive, even though the focus of visitors’ interests might change.

As for future historic property owners, Kaiser said he believes other young people will be interested in stepping in as owners.

“My wife and I are very hands on,” Kaiser said, adding they do most of the work around Brandon Hall themselves. “We have one fulltime staff member, and, in addition, my mom is event director, coordinator, and helps with the weddings.”

Kaiser said he does all the yard work, landscaping and maintenance on the 30 acres and Ashley does a lot of the cooking.

“It is love of labor,” Kaiser said. “We are young. We do a lot of the work ourselves. We are not just sitting around watching a staff of 50 people doing stuff — it is literally me and my wife and one other person doing the work.”

By Staff and Wire Reports BATON ROUGE (TNS) — Seven employees at the Louisiana State Penitentiary at Angola — including... read more