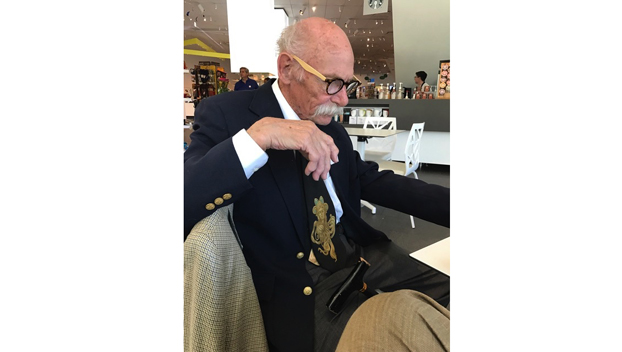 His life was epic in its challenges. He loved orchids, words, sentences, chocolate, Elvis and ultimately his wife of 57 years. He was a thinker and attempted to treat everyone he met with his kind stewardship. He would observe everyone and everything. He loved direct sunlight on his skin and quiet contemplation.

He was a lifelong Hotelier, having handled all aspects of upper management and accounting at large, small and boutique hotels throughout New Orleans and San Francisco. His hotel career began in the early 1960s and continued through the mid 1990s where he finished his last position at San Francisco’s Sir Francisco Drake Hotel.

Frizell also held management positions at New Orleans Magazine in the late 1970s before relocating to Oregon to assume operation of an Indian resort. With an early interest in pre-med, he would depart Louisiana Polytechnic before attaining his degree in order to care for his mother, Golda Frizell.

Ray and Kay Frizell, his wife of 56 years, met in Natchez in 1962 at the Belmont Hotel, but would defiantly relocate to San Francisco in the late 1970s. He led a literary life but never published a word in his lifetime. Over the course of his career, Frizell met noted authors such as Tennessee Williams, Norman Mailer, as well as luminaries Clint Eastwood and Elizabeth Taylor, among others.

Warm, kind and tolerant with a handsome face and his trademark “Mark Twain” mustache, Frizell was intelligent, well-spoken and always in possession of a sartorial flair. Always interested in ideas, Frizell was a survivor in life and was tested exhaustively, but always felt the presence of God. “I want to see what it’s all about” he once uttered, referring to the mysteries of life. Now he knows.

Survivors include his wife of 57 years, Kay, of Natchez; their oldest son, Raymond Kyle Frizell and wife, Janie; their middle son, Guy Michael Frizell and his daughter, Mitzi Kay Frizell.

As Frizell’s daughter, Mitzi, commented, “he’s a hard act to follow.” For the family, the loss is immeasurable.

Raymond Fritz Frizell lives in the hearts of his surviving family to whom he dedicated his life.