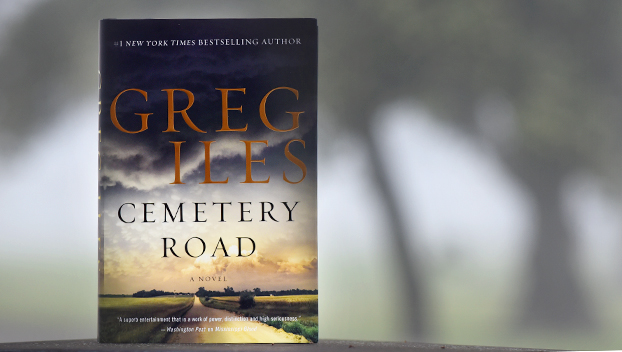 “Cemetery Road” is the Natchez author’s latest thriller about an investigative journalist who is dragged into a murder investigation after he returns home to Mississippi.

The fictional-novel debuted at No. 2 on the New York Times Best Sellers list on both the Hardcover Fiction list and the Combined Print and E-book Fiction list. Ahead of Iles’ book in the No. 1 spot is “Where the Crawdads Sing” by Delia Owens — a book that has been on the NYT Best Sellers list for 26 weeks.

“Cemetery Road” also debuted at No. 2 in fiction on the USA Today Best-Selling Books list and No. 2 on the Canadian bestseller list.

Returning to Natchez from the Baton Rouge airport Wednesday, Iles said he received additional good news about the popularity of the book.

“Five minutes ago I got word that ‘Cemetery Road’ will only drop to No. 3 next week, and in today’s market that’s huge,” Iles said.

Iles said he owes much of the strong showing to Mississippi readers.

“I want to thank all my Mississippi readers for their support,” Iles said. “They really come out strong when I tour the state that first week, and those sales help me hit high up the list. From Tupelo to the Coast, Mississippians are still readers.”

On Twitter, Iles announced Wednesday that he is suspending his book tour because of sickness. Iles was scheduled to be in Houston and Dallas Wednesday and Thursday.

“I hate having to cut my tour short, but my brother (Geoff) and I have been doing two and three cities per day for almost three weeks, and I developed a back problem related to my car accident some years ago,” Iles said.

“I had to cancel some stops, but I’ll reschedule Texas and Arizona as soon as I’m able,” Iles said. “It feels great to be getting back to Natchez, though. Nothing’s better than home.”

NATCHEZ — Spring Pilgrimage is in its second weekend in Natchez and a highlight this weekend, in addition to... read more