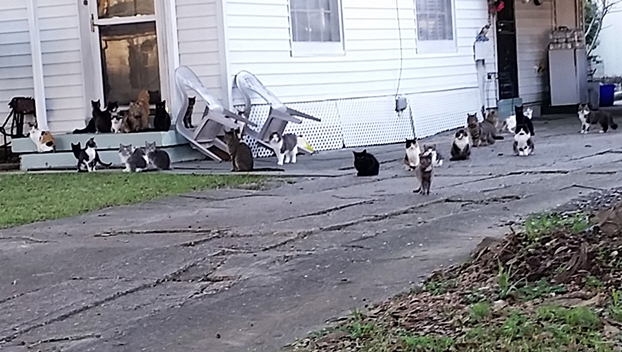 A large group of cats were found at a Montebello Drive house after Hurricane Katrina refugees moved into the property The cats were caughts and fixed before could multiply more than they already had. (submitted photo)

NATCHEZ — Stop at virtually any street corner in Natchez, look around a bit and you’re sure to see a stray cat or two.

If you begin paying attention all over the city, you’ll see Natchez has a feral cat problem.

Depending on whom you talk to, the cats are either a blessing or a curse.

On one hand the feral cats help control vermin – rats, mice, lizards and frogs, some people say, and on the other hand, an overpopulation of feral cats can be a health hazard, with the cats carrying diseases.

Both arguments have their merits, Dr. Byron Garrity, DVM, said.

“It is a help to the community,” Garrity said of Natchez’s feral cat population. “Cats do offer a benefit in terms of vermin control, but an overpopulation of them also creates a sanitation problem issue and a potential for public disease incidents in terms of parasites and ringworm and other things that even pet cats, but especially the wild cats, can carry.”

Many people do not realize that Natchez has a large number of feral cats, Garrity said, and while it is impossible to put an exact figure to Natchez’s feral cat population, most people agree Natchez has too many feral cats.

“There is a public health issue with the overpopulation of them,” Garrity said, “and the truth is with a lot of people, they don’t realize how many there are out there.”

Cats are nocturnal, meaning they hunt and roam during the night, and unless you are out at night, you might not see many of the feral cats in Natchez, Garrity said.

Marie Gasquet agrees Natchez has too many feral cats, and with spring kitten season upon us, the city’s feral cat population is expected to grow.

“There is a feral cat problem all over Natchez,” said Gasquet, who volunteers with a group of 20 to 30 people who help track and trap feral cats in the community. “We go out and try to find cats in areas that are mainly poverty-stricken areas.”

Gasquet said she got involved in helping trap feral cats after Hurricane Katrina, when a family of Katrina refugees moved in to a house on Montebello Drive.

“The lady had 28 cats … the cats were already there (when they moved in),” Gasquet said, “and they didn’t have the heart not to feed them. So, they fed them and those cats stayed in her house.”

That’s when Gasquet said she realized the importance of trapping feral cats and having them spayed and neutered.

Ginna Holyoak has been heading up Natchez’s feral cat group for several years. While the organization of 20 to 30 people is loosely organized, the group is registered through the Mississippi Spay and Neuter program, Holyoak said.

“We’ve been doing the spay-neuter for years,” Holyoak said. “We started raising money in Natchez in 2011.”

The volunteers set up traps for the cats, capture as many as they can and then take them to a veterinary clinic, most recently Garrity’s clinic, Bluff City Veterinary Clinic, 429 U.S. 61, Natchez, Gasquet said.

Garrity, who has been working with the feral cat group for approximately 15 months, said he administers anesthesia and performs the spay or neuter operation and then administers antibiotics.

“I was willing to work with them Monday through Thursday any time they could catch them (feral cats)” Garrity said. “You catch them when you can. It is inhumane to keep them in those traps any longer than you have to. I was willing to do the surgeries at night or whenever I had to so we could get them back on home and released back into the wild as quickly as possible.”

The cat trappers work to release the cats back to their original environment, if at all possible. If not, for instance, Garrity said, because someone might object to having the cats in the area, then the group works to identify a suitable location.

Gasquet said the cat trappers work with farmers to release some cats into their barns.

“We have barns we take them to, but we inspect the barns to make sure they are OK, Gasquet said. “We make sure they have shelter, and they feed them and everything. Here is the advantage of this. No. 1, we are taking the cats from an area that they are a nuisance. No. 2, we are putting them in to an area that they are needed. The farmers are needing cats because the mice are eating the wiring to their equipment, their very valuable equipment. Therefore, it is kind of a win, win, win situation. A win for the people who are having problems with the cats, a win for the cat and a win for the farmers.”

Gasquet said the feral cat group is always looking for farmers who would be willing to put feral cats in their barns.

The feral cat group is always in need of funds to help pay expenses for spaying and neutering the captured feral cats, Holyoak said, adding for a long time, initially the expenses were paid out of the volunteer trappers’ own pockets.

Last year, however, the program got a boost, Holyoak said, when two benefactors, who wished to remain anonymous, stepped forward and made generous donations totaling approximately $5,000.

“The donors were just trying to help,” Holyoak said. “They said, ‘If you do the tapping, we’ll pay the medical.’”

That was approximately 15 months ago, and now that money has run out, Gasquet said.

Garrity said the Mississippi Spay and Neuter program offers vouches that pays approximately 85 percent of the expenses for the spay and neuter operations through the feral cat program that is registered with the organization, and the volunteers do not have to pay any extra out of pocket.

However, the spay and neuter program administers the voucher program through funding raised within the county, Garrity said, and the Natchez feral cat program has run out of funds – right at kitten season.

All of the participants agree the Mississippi Spay and Neuter program is important for the health of the community, and Garrity points to the success of the program over the past 15 months that he has been involved.

A fundraising effort is underway, Gasquet said, adding she has containers set up at some retail locations including Containers are at Davidson’s Package Store, The Nest and at Natchez Under-the-Hill at the Silver Street Gift Shop.

Also, checks can be made out and mailed to Mississippi Spay and Neuter, 100 Business Center Parkway, Suite B, Pearl, MS 39208, Gasquet said, adding that people should write on the check that the funds are for the “Natchez Feral Cat program.”

Garrity said during the past 15 months, he has performed 108 surgeries.

“We do both males and females, and I think that is important to note – the theory behind reproduction physiology is that fewer intact females and fewer intact males running around the less likely pregnancies will occur. It is an obvious statement, but a lot of people don’t even think about it.”

Garrity said the trappers are not selective in the gender of the cats they trap, and he spays or neuters every cat the group brings in.

A single female cat, Garrity said, can produce two litters per year and each litter of five to six kittens has two to three females. A female kitten can start reproducing within six months of being born, Garrity said, adding he estimates the 108 surgeries he has performed over the past 15 months have eliminated the possibility of 1,112 unwanted kittens from being born.

“A single cat,” Garrity said, “if she has two females in her first litter, she is going to have three in the second, so there’s five additional reproductive females produced within one year from a single female and each of those can have five, so five and five that’s 25, plus the original female is going to have a second litter, too.

Spring is usually a productive time for the cat population to boom, said Lena McKnight, director of the Natchez-Adams County Humane Society.

“The problem with feral cats is that they can’t be handled,” McKnight said. “They’re not domesticated. You can’t pick them up. You can’t hug them. People want to bring feral cats here (to the NACHS animal shelter), but if we can’t touch them, we can’t vaccinate them, we can’t treat them, and then it runs into the problem that we also cannot adopt them out.”

Garrity also noted the problem of handling feral cats and said he was one of the few veterinarians in the area willing to handle feral cats, because veterinarians cannot allow their employees to handle dangerous feral animals.

Garrity, however, said he vaccinates himself regularly to make sure he cannot pick up diseases from the feral animals, and he handles all the feral cat operations himself.

McKnight said the NACHS animal shelter has many adoptable domesticated cats on hand and is anticipating an influx of several kittens this spring.

“We very much appreciate them and their efforts, because we fill up very fast during kitten season,” McKnight said. “We see a big influx of kittens and then once we fill up, it’s hard to make everybody want to adopt a kitten at the same time of year. It doesn’t quite work that way. They come in and sometimes they grow up here.”

McKnight said she advocates spaying and neutering programs for all cats and dogs. The Mississippi Spay and Neuter program also pays a portion of cost for qualifying low-income domestic cat and dog owners, who register through the program, McKnight said.

“We just can’t adopt out all the unwanted cats and dogs, so spay and neuter across the board is the best way to control this problem,” McKnight said. “We would like to see an ordinance in place requiring people in the city limits to have their pets spayed and neutered, unless they have a breeders’ license.”

McKnight said the NACHS has submitted a proposed animal control ordinance for consideration to the Natchez Mayor and Board of Aldermen.

For details about the Mississippi Spay and Neuter program and how to benefit from the program’s voucher system, call 601-420-2438.

If you would like to contribute to the program, make checks payable to Mississippi Spay and Neuter, and mail to 100 Business Center Parkway, Suite B, Pearl, MS 39208. Also indicate on the check that the funds are for the “Natchez Feral Cat program.”

NATCHEZ — As river levels drop, weather forecasters warn what goes down may come back up later this spring.... read more