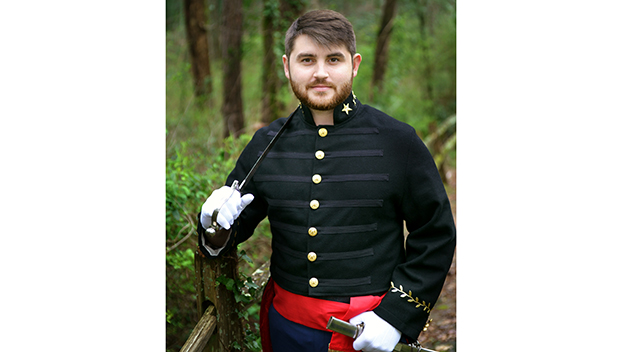 Christopher Byrne Chandler is this year’s Natchez Garden Club Kueen. He is the son of John and Kristie Byrne Chandler. (Photo courtesy of George Ritchey)

Chandler honored to be NGC King for Spring Pilgrimage

NATCHEZ — The royalty in Natchez is not exclusive to people who live on the shores of the Mississippi River, though the 2019 Natchez Garden Club King spent much of his childhood there.

Christopher Byrne Chandler of Vestavia Hills, Alabama, assumes his throne while wielding the sword of his grandfather, a former mayor of Natchez, and wearing an 1800s-style engineer dress coat, he said.

Christopher is the son of John and Kristie Byrne Chandler and is the grandson of Loveta Byrne and Tony Byrne of Natchez and Peggy Chandler and the late Winston Chandler of Columbus.

Christopher Chandler’s mother, Kristie Chandler, and sister Madison Chandler were both former queens of the Natchez Garden Club Tableaux — in 1984 and in 2014 respectively — and his uncle, Kevin Byrne, and grandfather, Tony Byrne, were once kings.

While Tony Byrne ruled the NGC in 1958, his queen, Margaret “Punky” Ware, gave him his sword as a gift, which has now been handed down to his grandson, Chandler.

“It has kind of been passed down I guess,” Christopher Chandler said. “My queen (Elena Rodriguez) is very nice and easy to talk to and we have gotten along great.

“I’m obviously honored. I didn’t think someone outside of Natchez could take on this honor until my sister did five years ago, but I guess my family’s influence has had an impact. … I have a great court this year. Both the guys and the girls are nice and very polite people that I’ve been associated with and have been around in the past. I’ve kind of become a part of them.”

Christopher Chandler is a 2015 graduate of Vestavia Hills High School and said his distance from Natchez, didn’t stop him from spending much of his childhood in the great river city.

Christopher Chandler said he grew up just like many of the close friends he has made through the pilgrimage productions, spending most of this weekends and holidays in Natchez with friends and family and enjoying a quiet country lifestyle in nature.

“I love to hunt and fish, and I mainly started hunting with friends in Natchez,” Christopher Chandler said. “I love to be outside, and do anything outdoors.”

Christopher Chandler is currently attending Auburn University where he is majoring in natural resource management with a minor in watershed sciences. With that, Christopher Chandler said he hopes to start a career where he can work outside and use his passion for science to keep harmful chemicals and substances from hurting the rivers, lakes and the things he loves.

“I hope to not have a desk job,” he said, “but to be outside doing what I like, protecting the environment.”

“Tableaux is very unlike anything I’ve ever been a part of, especially behind the scenes,” Christopher Chandler said. “You get to know people very well between the shows, back in the dressing rooms and at all the cocktail parties. … The parties are awesome and the people behind them are incredible. It’s just a new experience unlike anything else.”

NATCHEZ — The hardest step most often is the first step when it comes to starting a business, a... read more