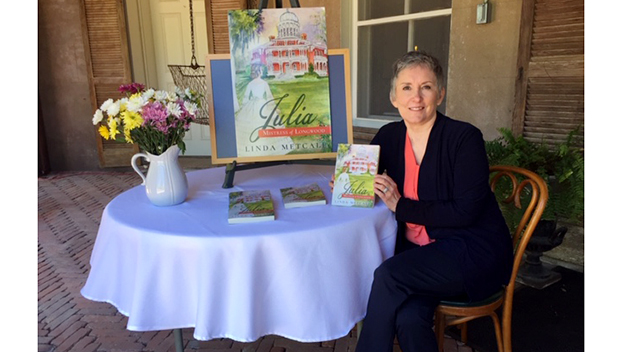 Linda Metcalf is at Longwood this week selling signed copies of the book, and she will be at Longwood from 9:30 a.m. to 1 p.m. today and Thursday. (submitted)

NATCHEZ — Linda Metcalf said she visited Natchez approximately 30 years ago and toured Longwood, the famous antebellum, octagonal mansion located on Lower Woodville Road that was never completed because of the Civil War.

“I was disappointed that they didn’t tell more about the mother and the wife,” Metcalf said of the tour of the house. “I made a decision then that I was going to write a book about Julia.”

Julia was the wife of Haller Nutt, the man who started building Longwood in 1859.

Work on the mansion, however, was halted in 1861 at the beginning of the Civil War and Nutt died of pneumonia in 1864 never realizing his dream of completing the mansion.

The family lived in the basement where the only nine rooms of the planned 32 rooms were completed.

Metcalf said her infatuation with the story of Nutt’s wife, Julia, continued through the years.

“I came back three or four times,” Metcalf said, “and got more information and spent a lot of time with Mimi Miller (former director of the Historic Natchez Foundation).”

Those meetings produced a lot of documentation, including old letters, court documents and pictures, Metcalf said.

A family history specialist, Metcalf said she worked last year in New York City in the Family History Center where she discovered she had a common ancestor with Julia.

“That was the catalyst I needed to get me to go ahead and write this book,” Metcalf said. “I was here last August right after I found out I was related to her and met with Mimi some more and finished the book and have it for sale now.”

The book titled “Julia Mistress of Longwood” was self-published in March as a historical fiction and is illustrated by Natchez artist Carolyn Harper.

“It is written like a diary, a blend of fiction and fact,” said Eugenie Cates, Pilgrimage Garden Club president and Natchez Pilgrimage Tours board member. “It is selling really, really well.”

The 274-page book is available at popular online booksellers for $22.99.

Metcalf is at Longwood this week selling signed copies of the book, and she will be at Longwood from 9:30 a.m. to 1 p.m. today and Thursday.