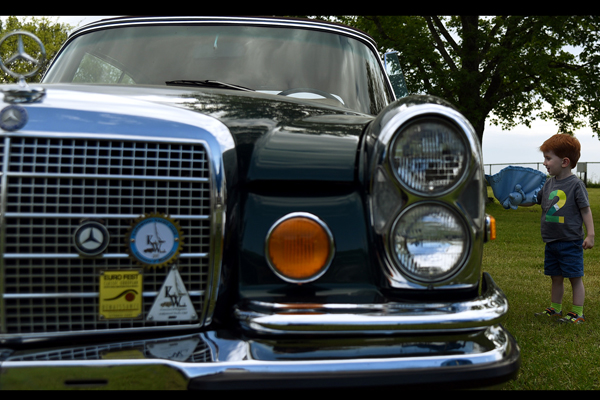 The annual Euro Fest car show is a favorite of fans large and small. (file photo)

NATCHEZ — Flags of different European countries have been waving throughout downtown in recent weeks.

The flags represent automobiles manufactured in the various countries that will be on display Saturday on the grounds of Rosalie, as part the fourth-annual Natchez Euro Fest car show that gets underway at 10 a.m. Saturday.

Admission to the event is free, said Mike Marsh of Brandon, who is the promoter of Euro Fest and has similar annual events in Jackson, Nashville and New Orleans.

Natchez is the newest addition to the events in which European car owners and lovers from throughout the United States gather.

Marsh said the Euro Fest events give European car lovers and owners an opportunity to see other cars and talk about the antique and restored works of automotive art.

Car owners enjoy the local interest in their automobiles and love to answer questions and in general just talk cars, Marsh said.

The featured marquee is the Alfa Romeo. It’s an Italian carmaker whose history goes back to pre-World War II racing days, Marsh said.

Other exotic automobiles that are expected to be at Saturday’s show include a 1930s Rolls Royce, whose owner lives in Natchez; E-Type Jaguars, Mercedes, Porsches and Austin Healeys, to name a few.

Motorcycle lovers also will have their favorite mode of transportation represented on the grounds, with such brands as Moto Guzzi, Ducati, BSA and Triumph.

“We are expecting 125 cars this year,” Marsh said. “They will be coming from 11 different states.”

Some owners will be driving their automobiles to Natchez and going directly to the National Guard Armory on Liberty Road to gather as they get into town Friday.

Marc Doyle is one of many local car enthusiasts who help with promotion of Euro Fest for Natchez.

“We are car guys and want to help by promoting Natchez as a town,” Doyle said. “This is another reason to draw people to Natchez.”

By TIM GUERCIO The Natchez Democrat NATCHEZ — Adams County Christian School started off by getting behind in the first... read more