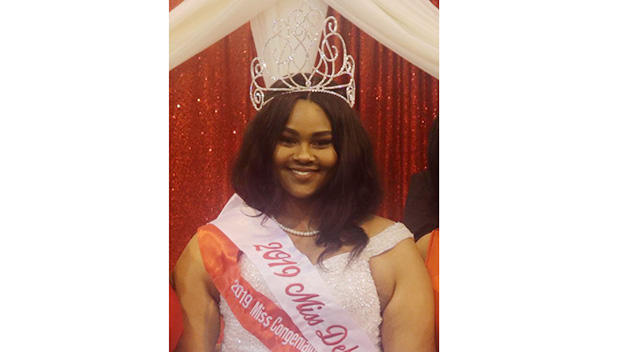 Cathedral High School senior, Damira McGruder was recently crowned the queen of the 2019 Miss Debutante pageant, sponsored by Natchez Alumnae Chapter of the Delta Sigma Theta Sorority. She is the daughter of Terri McGruder and the grand-daughter of the late Barbara Lewis. (submitted)

NATCHEZ — Cathedral High School senior, Damira McGruder has an entire list of achievements longer than the sparkling white gown she wore while she was being crowned the queen of the 2019 Miss Debutante pageant two weeks ago at the Natchez Convention Center.

The honor was awarded to the high school senior who could raise the most money for a scholarship program through the Natchez Alumnae Chapter of the Delta Sigma Theta Sorority — and Damira had no trouble finding sponsors, said her mother, Terri McGruder.

“She reached out to all of the churches and a lot of friends and family,” Terri said.

Just a week before she received the crown, Damira returned home from a statewide Science Olympiad Competition in Hattiesburg wearing a neck full of medals she earned while helping her team qualify for a national competition in Ithaca, New York.

Last year, Damira was one of two students from her school to place in the national competition, when she placed sixth out of the top teams from across the nation.

Damira said she loves to sing, travel and read and is passionate about helping people — which is something she has done for most of her life through volunteer work at the Humane Society and the Natchez Stewpot.

While she was helping take care of her late grandmother, Barbara Lewis, Damira said Lewis helped her realize what she wanted to do with her future.

“For the longest time, I knew that with whatever profession I went into I wanted to help people and be a very impactful person in their lives,” she said. “One day, when I was helping my grandmother she said I was her little nurse. At that point, I said, ‘hmm, a nurse.’ Later on, in my freshman year, we watched a video of a live birth. I knew I wanted to do something with children, and that video sparked my interest.”

Damira also attended the March for Life in Washington, D.C., with a group of students from her school last year, which she said was one of the most impactful trips of her life.

“I know I saw more than 1 million people standing around me fighting abortion,” she said. “I thought if that many people were there for Pro-Life, how many more could there be in favor of Pro-Choice?”

Knowing her love of young children and making a positive impact on people’s lives, Damira said she accepted scholarships to Mississippi State University, where she plans to study biochemistry with a pre-medical concentration before attending med school at her dream college, Baylor University, in hopes of becoming an obstetrician.

Damira is a member of the Key Club, the National Honor Society, Peer Ministry, the Science Olympiads and Science Quest and is an active member of Pilgrim Missionary Baptist Church.