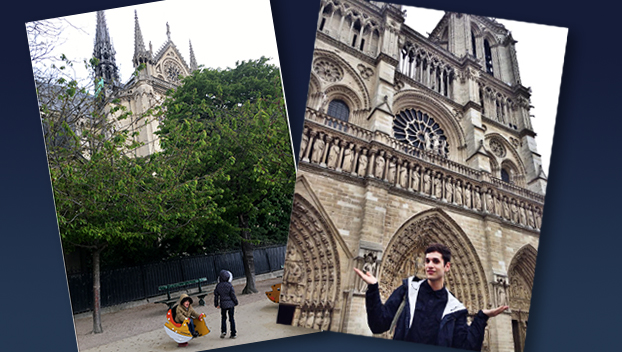 At left, Selina and Quintin Rutherford playing in Square of Pope John XXII, in the park beside and behind Notre Dame in 2017. At right, Natchez-native Joseph Ables recently visited the Cathedral.

“I’ve never been inside, but more than once I’ve been outside,” said Coullerez, who taught at Trinity Episcopal School and Cathedral. “It is awful to see this monument so well-known around the world and for sure by the French people and people who live in Paris.”

Coullerez said he had no comparisons for the loss of the historic Notre Dame Cathedral.

“For the French people and the people who live in Paris it will be a disaster for the rest of their lives. You cannot make a comparison with anything with that building except the Empire State Building if it collapsed, something really, really important.

“It is very difficult for me to make a comparison. I’m not a Parisian. I never lived in Paris. I was more than once over there. I never went inside there. I could not do it now anyway. It’s really very shocking … I regret I have not been inside.”

Margaret Marlow Stutzman, a member St. Mary and a Natchez resident said she visited Notre Dame with her husband in August.

“I’m devastated,” Stutzman said. “It is overwhelming watching this.”

Stutzman said watching the cathedral burn was emotional for her.

“I’m catholic so everything in there meant so much to me,” Stutzman said. “It is overwhelming to see the artifacts — paintings and statues. The loss of all of this history of the church can never be recovered.”

The Rev. David O’Connor, pastor of St. Mary Basilica said he was saddened by the loss.

“It is a major disaster and loss not only to the church, but to the community as a whole,” O’Connor said.

O’Connor said he was fortunate to visit Notre Dame Cathedral on two separate occasions most recently in 2006.

“The architecture on the inside is very attractive, great stained glass windows,” O’Connor said. “Then they have what they call the Treasury of the Cathedral and that is where they have stored, basically an archive, many of the gold vessels they have used over the years. A major feature would be the crown of thorns believed to have been used by Christ himself…. The symbolic value of that wonderful house of prayer would be of major value to all of France, not just the Roman Catholics.”

O’Connor said he has fond memories of a guided tour of the Cathedral.

While at Notre Dame, Stutzman said she attended a Mass and lit candles in memory of her family members.

Stutzman said August was her first visit to Notre Dame and it meant a lot to her.

“I just didn’t know it would be my last (visit to Notre Dame),” said Stutzman. “I’m not real active right now, which makes it so much more overwhelming.”

Stutzman said her visit to Notre Dame and St. Peters last August gave her a renewed sense of faith from both historical and religious perspectives seeing the historic artifacts.

“I’ll cherish the memories of my visit and my pictures forever,” Stutzman said. “I haven’t been real active, and it (the visit) made me reevaluate my faith.”

Natchez-native Joseph Ables, who was raised in Vidalia and graduated LSU in 2016 with a degree in French and International Studies, studied abroad in France.

Ables said he loved visiting Notre Dame when he was in France.

“My first time seeing it was simply astounding,” Ables said, “beautiful architecture, gargoyles carved into the structure watching tourists and locals alike simply in awe of its beauty.”

Ables said watching the cathedral burn on Monday was devastating for him.

“I feel as if France is my second home, and my heart is terribly shattered,” Ables said. “I hope this national treasure will be able to be saved and preserved for generations to come.”

Robin Rutherford of Natchez fondly recalled the first time her family visited Notre Dame Cathedral in May 2017 and that the cathedral holds a special place in the hearts of Rutherford and her husband, Cole.

“In fact, that is the location we chose to announce to the world that we were expecting our last baby,” Robin Rutherford said. “…We were in complete awe seeing the intricacies of both the exterior and interior of the cathedral. …When we saw today that Notre Dame was on fire, we were devastated. My son, Quintin, 6, was particularly attached to Notre Dame, and speaks often of visiting there. Today he asked that we pray that the firefighters would be able to save the towers on the front of the church, and that everyone remain safe. When watching the news footage he said, ‘Mom, I feel like a piece of my heart is burning.’ My 9-year-old daughter, Selina, was most concerned because her baby sister Aria, 1, hasn’t gotten to see Notre Dame yet, and fears that Aria now won’t get the chance.”
Robin Rutherford said she has spoken to the children about the possibility of rebuilding and restoration.

At 16, Ryan Skates has been fortunate to visit Notre Dame Cathedral twice. Skates said his first visit was when he was approximately 7-years-old, and he can barely remember the trip.

His most recent trip, however, was last summer when he and his sister, Ella, 12,  went on a two-week European trip with their grandparents John and Eileen Ball.

Part of the trip included a visit to Notre Dame Cathedral. While there, the family attended Mass at the Cathedral, Ryan said.

As Cathedral students and members of St. Mary Basilica, Ryan said they knew most of the service even though it wasn’t being spoken in English.

“It was done in French, but we recognized the music and what we were supposed to do,” Ryan said.

Ryan and Ella said the most lasting impression they had Notre Dame Cathedral was its size.

“It was 10 times bigger and more decorative than St. Mary,” Ryan said.

Both Ella and Ryan said they were glad to have seen the church before the fire. They are glad they have pictures in a book their grandfather made of the trip as a lasting souvenir.

“It is sad and crazy that it has burned down,” Ryan said.

O’Connor said in watching the devastation in Paris, he could not help but think of the possibility of something tragic happening to St. Mary Basilica and similar thoughts come to his mind every time storms roll through the area.

“The first thought I always have is what a tragedy it would be if St. Mary Basilica got hit by one of those very random storms,” O’Connor said. “It would grieve my soul to see that happen. I have an equally profound value on Notre Dame in Paris. It was an enormous religious symbol for not only the Catholics but as a civic monument for the people of Paris as well.

“We need to make sure we do thorough inspections. Our building has been rewired and redone in the past 20 years, and so I trust that we are safe that way but you never know if lightning should strike.

“Thank, God, we haven’t had the kind of tragedy that Notre Dame is having today.”

NATCHEZ — Clayton resident Ruben Smith didn’t see the flames from the fire at Notre Dame, but he did witness... read more