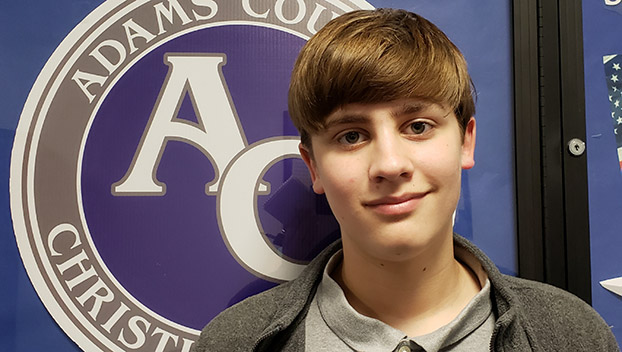 NATCHEZ — An Adams County Christian School eighth-grader said he received “the shock of his life” when his teacher told him he was the chapter winner of the Daughters of the American Revolution essay contest.

“I definitely did not expect to win,” Michael “Mike” Mascagni said, as he anticipated an upcoming presentation along with four other winners, including Leah Murray and Gracie Ann Cavin of Wilkinson County Christian Academy, Kinslee Young of Cathedral and Jack Peterman of ACCS.

Tuesday afternoon, Mascagni presented a prize-winning essay at the Natchez Chapter DAR meeting at Rosalie in front of Natchez chapter members and guests from the William Dunbar Chapter DAR and their families.

Mascagni said he was both excited and nervous about the task, but was proud to lead a revolution at ACCS with his essay on the women’s suffrage movement.

This school year was the first year that ACCS students participated in the DAR American History essay contests under the direction of their teacher Christina Daugherty, said Mary Ellen Rosenblatt, a chairman of the Natchez Chapter DAR.

The students competed against students in their grade from local schools and other schools across the state, and two of ACCS’s students won; Mascagni won first place out of the eighth-grade local chapters and Peterman, won third in the state for the seventh-grade.

Mascagni said he enjoys spending time at home reading, live streaming video games on his YouTube channel and playing with his younger brother, Nicholas, and his dog, Izzy.

Up until last week, Mascagni said he had all but forgotten the essay he wrote last September, in which he envisioned himself with a wife and daughter during the early 1900s when women everywhere campaigned for the right to vote.

“I went to war while my wife and daughter worked at home,” he said. “That proved to the men in that era that women were worth something.”

Mascagni said his essay concludes in the 1930s after women had finally gained suffrage.

“As a husband and a father, I then realized how much my wife’s and daughter’s lives would be changed,” he said. “I talked about my wife and daughter and the possibilities they have that they didn’t have before, now being able to vote and have better jobs and not just be ‘stay-at-home-slaves.’”

Mascagni is also a member of the cross-country track team and the drama club, in which he recently starred as the Walt Disney villain, Hans in “Frozen.”

He is the son of Michael Mascagni Sr. and Jennifer Mascagni.