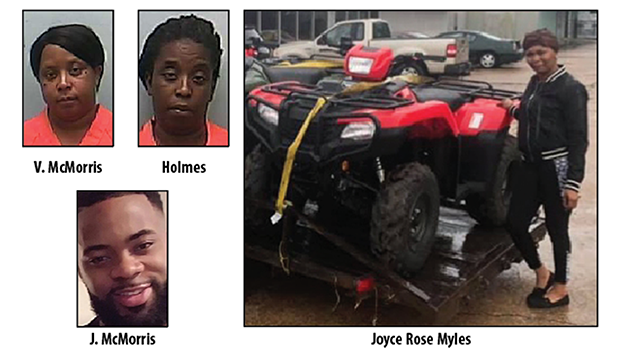 NATCHEZ — Adams County Sheriff’s Office deputies said they have one person in custody and are searching for three more people they say are involved in a scam using stolen credit cards to purchase four-wheelers and selling the four-wheelers to unsuspecting people.

“On April 3, the Adams County Sheriff’s Office was notified by a business on U.S. 61 North that Veronica McMorris allegedly purchased two four-wheelers valued at approximately $9,400 using a credit card that was later reported as stolen,” said Lt. Cal Green of the ACSO. “Veronica has subsequently been arrested and is being held at the Adams County Jail with no bond pending arraignment.”

Green said a similar incident was reported to the ACSO on April 9.

“On April 9, ACSO was notified by another business on U.S. 61 north that on March 27 Tira Wynette Holmes allegedly purchased a four-wheeler for approximately $8,000,” Green said. “It was later discovered that the credit card number used to make the purchase was fraudulent. Tira is wanted by ACSO and is still at large at this time.”

And, on April 16 another similar purchase was reported, Green said.

“On April 16, ACSO was contacted by a third business in the City of Natchez who advised that on April 8, Joyce Rose Myles allegedly purchased four-wheelers for approximately $31,400 using credit card information that was later discovered to be stolen,” Green said. “Joyce and her alleged accomplice, Jeremy Jamal McMorris, are both wanted by the ACSO and remain at large.”

Green said two of the four-wheelers have been returned by people who purchased them from the suspects.

“No charges will be filed against them (the people who returned the four-wheelers),” Green said. “However, if you have bought a new bike from any individual within the last month, you should contact the Adams County Sheriff’s Office to have it checked to see if it was purchased fraudulently. If you do not come forth, and we have to find you, the likelihood of you facing charges increases.”

VIDALIA — Monterey High School might get a new gym as Concordia Parish School Board members agreed to seek... read more