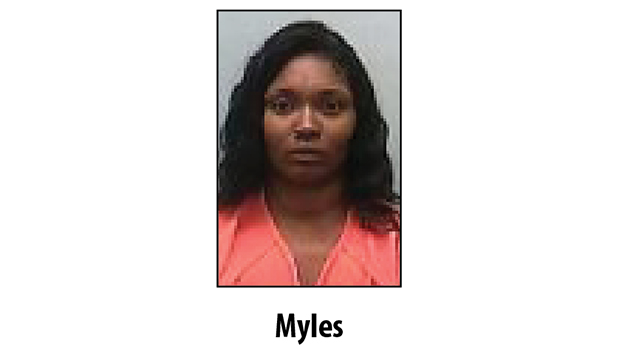 NATCHEZ — One of the suspects in a ring suspected of using stolen credit cards to purchase four-wheelers and then re-sell them to unsuspecting buyers turned herself in to authorities Thursday after seeing news reports about the case, Adams County Sheriff’s Office officials said.

Also, two more people who had purchased the four-wheelers from members of the ring turned the vehicles in to authorities on Thursday, said Travis Patten, Adams County Sheriff.

Suspect Joyce Rose Myles saw news reports about the sheriff’s investigation and contacted her mother, who brought her to the sheriff’s office Thursday afternoon, Patten said.

Myles was being held Thursday in the Adams County Jail with no bond, pending an arraignment.

On Wednesday, ACSO deputies announced they had arrested Veronica McMorris after deputies said she purchased two four-wheelers for $9,400 from a business on U.S. 61 North using a credit card that was later reported stolen.

McMorris, Patten said, posted a $5,000 bond on Thursday and was released from the Adams County Jail. Patten said he believes the low amount of the bond was due to the suspect having medical issues.

Meanwhile, deputies are still searching for two other suspects — Tira Wynette Holmes and Jeremy Jamal McMorris — in the scheme that occurred in late March and earlier this month.

Patten said four of the five four-wheelers purchased with fraudulent credit cards have been recovered, after unsuspecting people purchased them from the suspects.

Patten said the investigation is ongoing into how the suspects obtained the credit cards and that all of the suspects are related to each other.

“All of them are blood relatives,” Patten said.

“Their chances of being prosecuted are slim to none,” Patten said. “When these people bought these four-wheelers they actually had paperwork to go with them, so to the untrained eye it would looked legit.”

Patten said people who are trained would know better, however.

“That’s why I encourage people, if you don’t have a title in hand or buy it from the dealership, you need to leave it where it is at,” Patten said. “If people bring items to the sheriff’s office, we will run numbers to make sure they are not stolen.”

Patten said if the person who has the last four-wheeler that is still missing turns it in, they would not be prosecuted.

“If they don’t bring it in, I can assure you when we show up at your house, and we locate that bike, we will charge you,” Patten said. “Enough time has passed now for everybody who wanted to cooperate — they’ve had enough time to cooperate. They have until tomorrow (Friday) evening to get this last bike turned in. After that, all bets are off.”