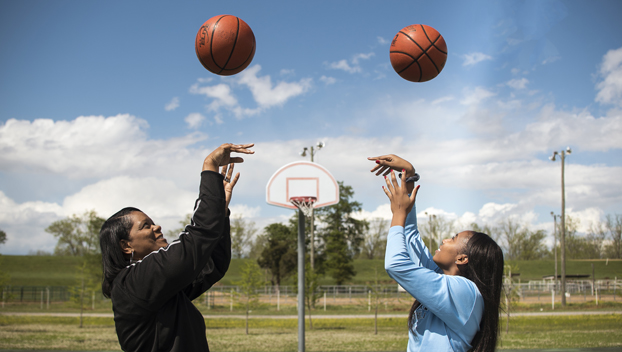 Last year Neal was named All-Parish player of the year as a junior.

“Kierra has played all four years and started as a freshman,” Ellis said. “Kierra did a lot for us. We depended on her to score this year.” Ellis commented on the type of offense that he likes to run. “We are an up-tempo team. If we pass it twice and have the shot, we shoot it.”

“My mom and my coach are my biggest supporters. They wouldn’t let me slack off at all this year,” Neal said.

Neal says she started thinking about playing college basketball as a freshman. “I love basketball and watch a lot of NBA basketball. I watch some WNBA, too.” Neal said. Neal plans to sign a scholarship Wednesday to play basketball for Holmes Community College in Goodman, Mississippi.

Abron has been coaching the girls team at Ferriday High for 21 years, and their record this year was 23-6.

“We will never lose a game as long as we never give up. I’m still happy if we give 100% and lose,” Abron said.

The Lady Trojans played a pressure defense almost throughout an entire 32-minute game. “We like to play a lot of up-tempo, we press a lot, trying to get steals and easy lay-ups.” Abron said. “The junior high team plays this way also, so they are ready when they get to high school.”

“I enjoy just coaching the game and not focusing too much on players stats,” Abron said.

NATCHEZ — One of the suspects in a ring suspected of using stolen credit cards to purchase four-wheelers and... read more