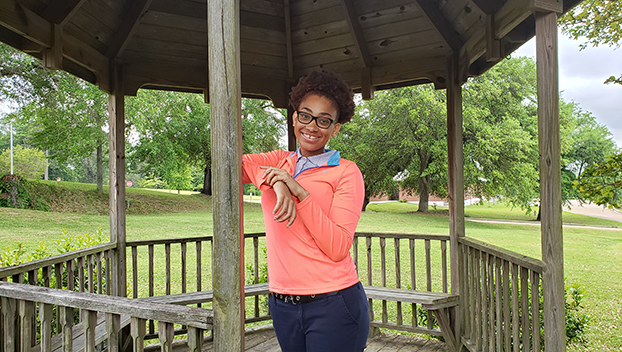 Leslie Lewis, sophomore at Natchez Early College Academy, will be attending the Mississippi School of Math and Science this fall. She is the daughter of Lisa and Roderic Lewis. (Sabrina Robertson / The Natchez Democrat)

NATCHEZ — Not every high school sophomore has the opportunity to live independently on campus.

However, Natchez Early College Academy student Leslie Lewis said she always has liked being different than her peers.

Leslie’s mother Lisa Lewis, said she and her daughter toured the Mississippi School for Mathematics and Science in Columbus last October, which helped settle her nervousness about her 15-year-old daughter leaving the nest early.

“The school is four an a half hours away from Natchez,” Lisa said. “That was my big issue. Leslie is the youngest of my children … and even though she’ll be 16 by the time she leaves for school, it’s like my 16-year-old is getting ready to go off to college. … But the campus is very secure, and she is very responsible for her age. … In order for her to blossom, I knew I’d have to let her go.”

Leslie said she dreamed of attending the school since her freshman year.

“It was something I expected,” she said. “Ever since I started to apply, I was just waiting for the letter to come back saying ‘congratulations.’ But even when I received that letter I was still overly happy. … Honestly, I didn’t feel like I was using my potential (at NECA) and I knew that I could do more. … I wanted a challenge. … Now I’m able to choose the courses that I’m interested in and the ones I know would be a challenge for me.”

Leslie is finishing two college-level courses at NECA, she said, and is a member of the Student Government Association, National Honor Society, National Beta Club and Track and Field team.

Leslie said she is also an active member of the Word of Faith Ambassadors Worship Center, where she is involved in the media department, choir and performing arts.

She enjoys Russian novels, such as Fyodor Dostoevsky’s “Crime and Punishment,” she said.

Photo gallery: Bees are no smoke on Main Street

Local beekeeper moves a hive of bees started in one of the trees on the corner of Main and Union... read more