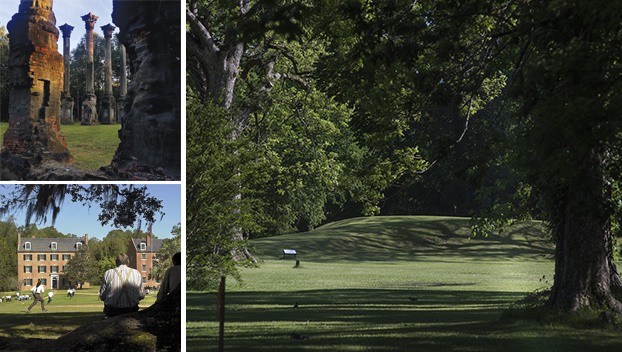 The Mississippi Department of Archives and History announced a new initiative that will include improvements at the Grand Village of the Natchez Indians, above, Windsor Ruins, top left, and Historic Jefferson College, bottom left.

NATCHEZ — A new museum, the restoration of a beloved Mississippi landmark and a renewed focus on the history of Natchez are part of a new initiative launched by the Mississippi Department of Archives and History.

Located less than an hour north of Natchez, Windsor Ruins is one of the state’s most iconic sites and one of the area’s most popular tourist destinations.

Blount said the freestanding columns are in dire need of attention and are in danger of collapse.

“They were never meant to be freestanding and pieces of the columns are falling off,” Blount said.

MDAH has hired an architect and architectural conservator who are currently working on a plan to stabilize the columns and preserve the site, Blount said.

In the meantime, MDAH has built a temporary chain-link fence around the columns, Blount said, to protect visitors from falling debris. Blount said once the restoration is complete, MDAH plans to add interpretive signage to the site and increase public promotion of the state landmark.

At the Grand Village of the Natchez Indians, Blount said MDAH plans to build an expanded museum with new state-of-the-art exhibits and also build a large pavilion.

“The groups have outgrown the current facility,” Blount said. “We believe a new museum can be a real treasure, similar to the (Mississippi Civil Rights Museum and Museum of Mississippi History) in Jackson.”

Blount said the Grand Village tells a unique and significant part of Mississippi history. The Grand Village was the last ceremonial mound center of the Natchez people and one of the only occupied mound sites in North America in the eighteenth century.

“We want this museum to be the very best Native American site it can be — one of the best in the country,” Blount said.

Blount said the expansion of the Grand Village facility would include a larger auditorium and a bigger outdoor pavilion than what is on the site.

The larger pavilion will be able to accommodate large school groups and also the Natchez Powwow, which has had to move to other locations when it rains. Plans are also for the pavilion to be made available to the public for weddings, family reunions and other community events, Blount said.

For Historic Jefferson College, Blount said plans are to make the historic site the gateway to Natchez for visitors traveling to the area.

Blount said both the “infrastructure and interpretation” at the college are outdated and that many of the buildings on the property require maintenance.

“Jefferson College is in need of attention, in need of restoration,” Blount said.

Blount said she could not comment on how the changes at Jefferson College will affect the current staff.

As the birthplace of Mississippi and the site near where delegates wrote Mississippi’s first constitution, Blount said Jefferson College is essential to MDAH’s vision for the area.

Blount said MDAH doesn’t plan to close the site permanently and hopes to one day open the site with its own interpretive exhibits and facilities that will make it the place where visitors go to be introduced to Natchez and the surrounding region. Blount said the exhibits would also include a more detailed look at the history of the college itself.

To get to that point, Blount said, MDAH’s priority is maintaining the structures on the site.

Blount said, much of the new initiative is in the planning stages and will take time and resources to come to fruition. Work on the restoration of Windsor Ruins should begin soon, and maintenance of the buildings at Jefferson College will be ongoing, Blount said.

“We are working with our partners to tell the broad and rich story of the history of Natchez and the region,” Blount said.

NATCHEZ — Smart Growth America researchers from Washington, D.C., may have the answer on how to revitalize Natchez and... read more