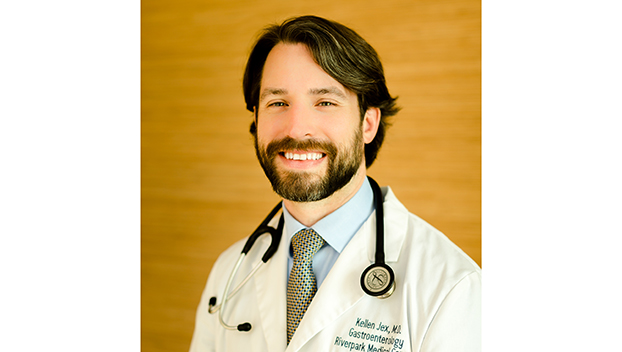 VIDALIA — Tillman Medical Group has long been the Gastroenterology Division at Riverpark Medical Center in Vidalia and now the group has a new up-to-date partner, Dr. Kellen Jex, MD.

While Jex is the new partner to the Tillman Medical Group, he is no stranger to the Miss-Lou.

“I’m from Natchez,” said Jex, who joined the the Tillman group approximately seven months ago. “I grew up here, and Randy Tillman is my father-in-law.”

“I didn’t know what I wanted to do when I went to college,” Jex said, “and he (Tillman) gave me an opportunity to come work over here (at Riverpark), kind of like a summer job. It was very interesting. I ended up getting a biology degree and decided to go to med school.”

Jex said he spent 11 years pursuing his medical degree, including studying biology and then medicine at University Medical Center in Jackson, where he served as an internal medicine resident and later went on to do gastroenterology with an LSU program in New Orleans.

“It is nice to be home,” Jex said of his return to the Miss-Lou. “I live in Natchez. I still live downtown. I grew up downtown.”

In addition to his work at Riverpark Medical Center, Jex said he also consults and makes rounds at Merit Health Natchez.

Jex’s primary focus, however, he said, is being a partner in the Tillman Medical Group at Riverpark Medical Center at 107 Front St., Vidalia.

Jex said he finds gastroenterology fascinating, because it is a broad field that is associated with many health issues.

“It is anything associated with the GI (gastrointestinal) tract,” Jex said, “from swallowing trouble, heartburn, reflux, stomach pain, stomach problems, liver trouble, pancreas trouble to anything to do with your small bowel and your colon so any cancers related to those.”

Jex said he likes working with patients to find out the source of their health issues and that each day can present a new challenge.

“In cardiology you focus in and do the same thing every day,” Jex said. “GI is amazing. My clinic is just everything across the board, treating hepatitis C, working up tests for mystery liver diseases. People come in with abnormal liver tests, and I have to figure out what is wrong. People come in with pain, and we scope a lot of people and look in their stomach and look in their colon. Sometimes healthy people come in, and we just do a screening colonoscopy and turn them loose, so it is very interesting.”

While Jex is a new face in the Tillman Medical Group, he said Tillman is still very active and that he hopes Tillman will be active for years to come.

“I’m a new up-to-date gastroenterologist, with up-to-date training,” Jex said of his role in the partnership. “Randy and I are partners, so we work together.”

Jex said Tillman is still based at Riverpark and still works at Riverland Hospital, as well.

“He (Tillman) actually travels and does cases in surrounding areas, too,” Jex said, “that don’t have a gastroenterologist.”

Jex said he is fascinated with new emerging studies in gastroenterology, including “micro-bio,” which studies the effects different bacteria in people’s guts have on their health.

The main gastroenterology issue for most people, however, Jex said, is for everyone 50 and older to get a colonoscopy.

“It is for screening and prevention of colon cancer,” Jex said.

FERRIDAY — Riverland Medical Center will be moving to a new facility and changing the hospital’s name in the... read more