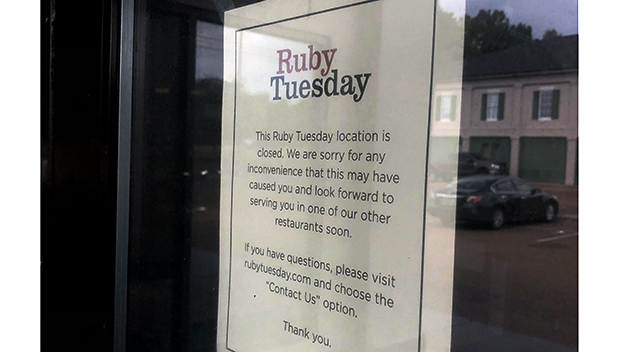 NATCHEZ — Visitors to the Natchez Ruby Tuesday location are being greeted with a message via a sign posted in the door saying the location is closed.

“This Ruby Tuesday location is closed,” the sign reads. “We are sorry for any inconvenience that this may have caused you and look forward to serving you in our other restaurants soon.”

Messages left with Ruby Tuesday corporate headquarters seeking comment for this story were not returned Tuesday.

The Natchez location was no longer listed on the company’s website Tuesday afternoon under the company’s listing of restaurant locations.

Similar signs have been posted in Ruby Tuesday locations throughout the nation for more than a year now as the company has closed more than 400 location, according to industry reports.

“The Maryville, Tenn.-based casual-dining chain closed at least 10 locations last month as part of a ‘routine review of our store portfolio,’ the company said in a statement,” wrote Restaurant Business, an industry website, a little more than a year ago on April 8, 2018. “The chain has closed a total of 15 locations in recent months as part of that review, the company said. …”

The Restaurant Business reported at the time that the closures were a continuation of the chain’s decline that started after it reach a peak in 2007 with 945 locations.

“It began closing locations the next year,” Restaurant Business reported, “shuttering 44, and has been in decline ever since.”

At the time of the Restaurant Business report in April 2018, the website reported Ruby Tuesday had a total of 544 locations.

“The latest closures suggest that the new owner and management of the bar and grill concept are willing to close additional stores in a bid to turn the company around.”

NATCHEZ — Less than 2 percent of students in the United States who took the ACT college entrance exam... read more