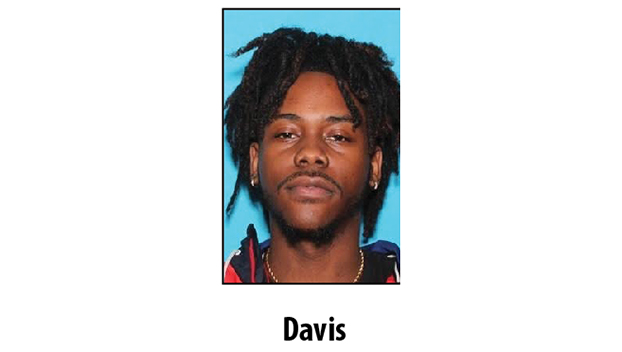 NATCHEZ — Natchez Police have identified and are searching for a suspect in a Monday afternoon shooting that injured a man.

“The shooting was a result of an argument between the victim and the shooter,” Armstrong said, adding police are actively searching for Davis, and a warrant has been issued for Davis’ arrest for aggravated assault.

“That way any agency that might run across him can run a check on him, and they will find out that he is wanted from our city,” Armstrong said. “We want the public to aid us in finding him. He is a very dangerous guy. He has already proven he is reckless with a firearm and doesn’t mind using it. We are just thankful that victim is not deceased as opposed to being at the UMC hospital in Jackson recovering from a gunshot wound to the back.”

The shooting occurred at approximately 5:10 p.m. Monday outside of an apartment in the common areas of the Holiday Apartment complex.

The injuries did not appear to be life-threatening, Armstrong said.

“We don’t know the extent of the injuries as far as long term is concerned,” Armstrong said.

Video footage revealed, Armstrong said, that the shooting occurred close to several other residents including children.

“Any of them could have fallen victim to this same gunfire, but these young kids can be seen scrambling for cover,” Armstrong said. “And we’re talking about children that looked to be as young as 4 or 5 years of age running for their life. That is not the lifestyle anyone should have to be subjected to. The shooter definitely showed a gross disregard for human life when he fired that weapon.”

Armstrong said anyone with information on Davis’ location should call 911 or Crime Stoppers at 601-442-5000.

“He is to be considered armed and dangerous,” Armstrong said. “Anyone aiding and abetting Jehron Davis from his lawful arrest may be arrested.”