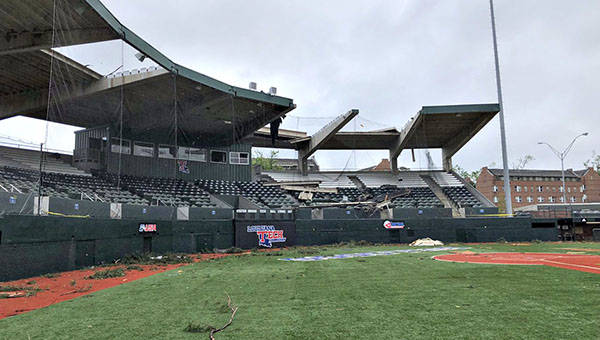 A couple of Mississippi colleges are helping a neighbor in need.

Southern Miss and Mississippi State’s athletic departments both announced plans this week to benefit Louisiana Tech, whose campus was ravaged by a tornado on April 25.

Mississippi State has added Louisiana Tech to its baseball schedule. The teams will play in Starkville on Tuesday, May 14 at 6:30 p.m.

Admission to the game is free for fans, and seating will be general admission. The Salvation Army will be on site accepting monetary donations to support Ruston, La., and Louisiana Tech’s campus to aid in recovery from the storm.

Southern Miss, meanwhile, will donate the proceeds from its traditional 50/50 baseball raffle from its home game against Florida Atlantic on Friday night. That game starts at 6 p.m.

The Southern Miss baseball and softball teams will also accept monetary donations. The softball team hosts Louisiana Tech in a three-game series this weekend — a doubleheader Saturday starting at 1 p.m., and a single game Sunday at 1 p.m.

Louisiana Tech’s athletic facilities took the brunt of the damage from the tornado that ripped through the campus early in the morning of April 25.

The softball team moved three games last weekend to the University of Louisiana-Monroe. The baseball team plans to do the same for its last home series of the season, May 10-12 against Western Kentucky.

“We are so appreciative and thankful to ULM’s administration and coaching staff for offering their assistance,” Louisiana Tech coach Lane Burroughs said. “We had so many schools reach out to us, and the support was overwhelming.”

VICKSBURG — For the past five years the MHSAA Class 6A girls state golf tournament was dominated by the rivalry... read more