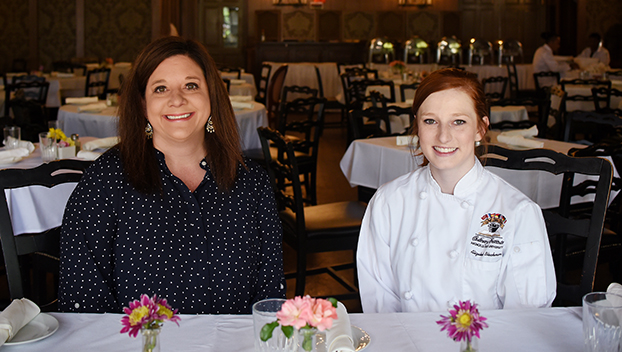 Lyn Fortenbery Jenkins, left, and Alizabeth “Beth” Blackmon are the new managers of the Carriage House Restaurant on the grounds of Stanton Hall. (Nicole Hester / The Natchez Democrat)

NATCHEZ — A new chef is in town “taking the helm” of the Carriage House restaurant in Stanton Hall, said Eugenie Cates, president of the Pilgrimage Garden Club.

Alizabeth “Beth” Blackmon, a graduate of the Nicholls State University in culinary and kitchen business management and a Natchez native, returned two weeks ago to “shake things up” a bit in the kitchen of the Carriage House as head chef, Blackmon said.

“I’m taking over the back of the house,” Blackmon said, referring to the kitchen with its staff of approximately 15 people, many of whom have been dedicated to the Carriage House for more than 25 years, she said.

“Honestly, the team at the back of the house has been phenomenal. They have my back no matter what. … I couldn’t have asked for a better transition.”

Blackmon has studied the culinary practice since she was a child, she said, under famous chefs in New Orleans, including Frank Brigtsen and John Foles. Blackmon also worked in Nantucket for four months doing heavy catering and restaurant work, she said.

Blackmon is being assisted by Lyn Fortenbery Jenkins, who was the assistant general manager of Dunleith and the Castle restaurant for 14 years before their recent closure.

Eventually, Jenkins said she would become the general manager of the Pilgrimage Garden Club, including all of its properties — Stanton Hall, Longwood, Carriage House and Natchez Pilgrimage Tours — but for now is helping Blackmon through her transition into the Carriage House as its co-manager alongside Blackmon.

The cuisine of the Carriage House had been previously managed by Chef Richard “Bingo” Starr for the past decade, Cates said adding he and his family are moving away to New Zealand.

“Bingo Starr and his wife, Mary Starr, have been with us for 10 years, and we’ve had a wonderful run with them,” Cates said. “They’ve decided to return to New Zealand, where Mary is from, with their children. We’re excited about their new adventure, and we’re working on new things here.”

Jenkins said she is grateful to Bingo and Mary Starr for building a large and faithful customer base at the Carriage House, as well as for serving the Natchez community for many years.

The Carriage House is currently open for lunch hours only, from 11 a.m. to 2 p.m. Wednesday through Sunday and by reservation. However, Blackmon said the hours may shift by this fall to make way for evening dinners on the weekends, extended bar hours and more farm-fresh dishes added to the menu.

“Sysco (a food distribution agency) has a new program where they provide fresh fish,” Blackmon said. “I’ve been looking into that as well as different ways we can buy a lot more local produce so we can bring some revenue back into the Miss-Lou.”

Jenkins said the bar could be up-scaled with small appetizers and charcuterie plates, and a larger drink selection as well. However, the original Natchez biscuits will never change, Blackmon said.

“We will eventually have more of a farm-to-table concept, with more craft cocktails, a larger wine menu, and drink specials,” Jenkins said, “but we will still have the same Southern food that our locals have loved over the years.”

NATCHEZ — Mary Blair Johnson may only be 6-years-old, but the Natchez girl said she is going to change... read more