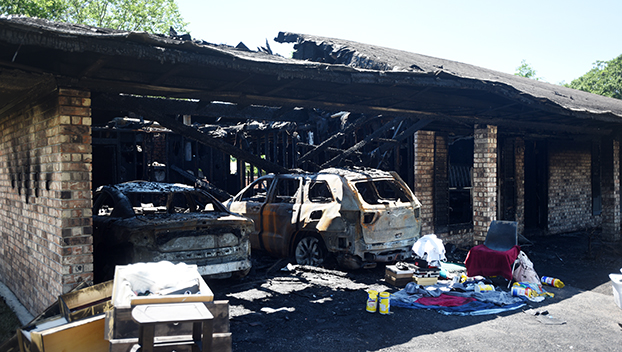 The charred remains of two cars sit in the garage of a Lindberg Avenue house after a fire destroyed most of the structure Sunday night. (Ben Hillyer / The Natchez Democrat)

The two occupants of the house were able to escape the blaze unharmed after smoke detectors alerted them to the fire that investigators said they believe started in the garage of the house.

“We got the fire under control in 20 minutes,” Green said. “It spread throughout the whole house.”

One firefighter sustained a minor superficial burn on his right shoulder, Green said.

Neighbors said they heard an explosion come from the house at approximately the time the fire was discovered, and Green said the noise likely came from two vehicles that were in the garage.

“Two vehicles in there, burned up,” Green said, adding a vehicle could have been the source of the fire. “Once the car got going, anything inside there (the garage) could make a noise, like the gas tank. They didn’t have any type of propane tanks.”

Green said he estimates 70% of the house was destroyed in the blaze.

“They did a good job to get that type of fire under control within 20 minutes,” Green said of the firefighters.

Fire Marshal Ryan Jones said the cause of the fire is under investigation.

NATCHEZ — Fire investigators said they are still working to determine the cause of a Thursday evening fire at... read more