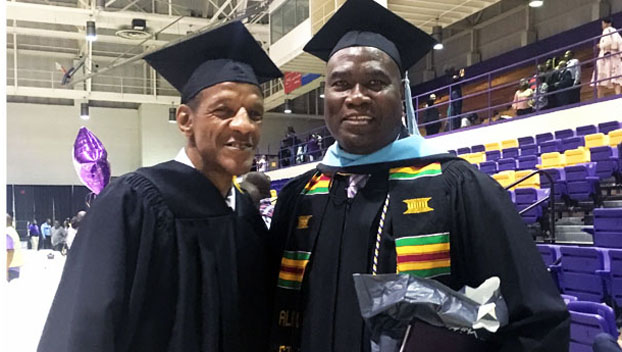 Former Alcorn State University basketball stars Albert Irving, left, of Natchez and Larry Smith, earned degrees from ASU on Saturday some 30-plus years after playing on the SWAC championship team together. (Submitted photo)

LORMAN — Two former teammates from the Alcorn State University basketball team graduated with degrees from ASU on Saturday morning in the gym named after their former coach David Whitney.

Irving, a current resident of Natchez, said he left Alcorn after four years of basketball when he was short only 12 hours of earning a bachelor’s degree in health and physical education.

Irving said he remembers winning the SWAC championship and being the No.16 seed at the NCAA tournament.

“We won the SWAC and had to play Indiana and Bobby Knight,” Irving said. “The next year we won the SWAC, beat Mississippi State, then lost to LSU and Rudy Macklin and that bunch.”

Irving said the Golden State Warriors drafted him in the fifth round of the 1982 NBA draft.

Smith was two years ahead of Irving and was also coincidentally drafted by the Golden State Warriors in 1980.

Irving worked out with Golden State and played in the preseason but ended up getting cut before the season started, Irving said.

Irving said his agent Lance Luchik was able to get him a contract with a professional team in France. After eight successful years of playing professional basketball in Europe and South America, Irving said he sustained an injury that ended his pro career.

“I was playing for Madrid Spain, and we were in Buenos Aires, Argentina, when I tore up my knee,” Irving said.

Long before that, however, Irving said he had promised his mother that he would go back and finish his degree. Last year he went back to Alcorn to finish those 12 hours.

Irving’s mother was high school basketball coach Mary Jean Irving, who coached from 1972 to 2005, first at Newellton, then at North Natchez and finally at Natchez High. She coached each of those teams to state championships, including two at North Natchez High, and the Natchez High gym is named in her honor.

Smith made the All-Rookie team in the 1980-’81 season and played 13 seasons in the NBA for Golden State, Houston and San Antonio.

Smith was an assistant coach for Rudy Tomjanovich and the Houston Rockets when they won back-to-back NBA Championships in ’93-’94 and ’94-’95.

Smith said that for the last two years he has been working on his master’s degree in workforce education leadership at Alcorn State and he earned that degree Saturday with his former teammate, Irving.

Golf classic goes on despite rain

NATCHEZ — For the second straight year, inclement weather could have played a role at the Joe Fortunato-Allen Brown Golf... read more