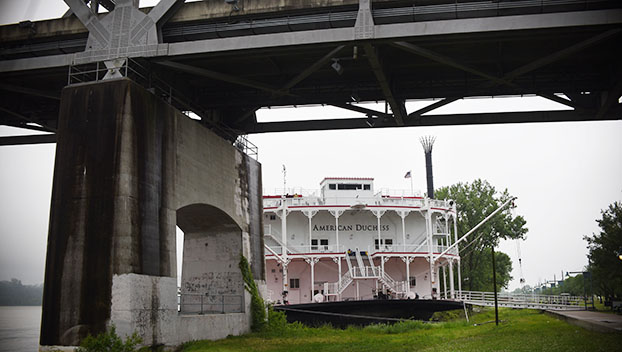 The American Duchess was docked beside the Mississippi River bridge in Vidalia Thursday. (Nicole Hester / The Natchez Democrat)

VIDALIA — The National Weather Service on Thursday raised the projected Mississippi River crest at Natchez to 57 feet, which it is expected to reach on May 21.

“It is all going to be dependent on what hits the ground from here on out,” said Vidalia Mayor Buz Craft of the latest projection and the potential of further rainfall.

The crest projection from the National Weather Service, Craft said, takes into account expected rainfall for the next 48 hours and that projection could change depending on future projected rain forecasts.

“We’ll be 2 or 3 feet away from having to protect the riverfront by putting HESCO baskets up,” Craft said, if the current projection holds.

Craft said, however, that more rain is projected in the weeks to come.

“We’re going to monitor it on probably every other hour for the next couple of weeks to see when it hits … to start gearing up to see what we need to do, for sure, to protect our assets,” Craft said. “I don’t think in any way are we in danger of anything on our levees, I don’t think, unless we have a blowout or something.”

Craft said the city would do what is necessary to protect the riverfront.

“We might have to spend some more money down there,” Craft said. “We will keep our eyes to the sky.”

The high river levels are already causing some problems for boats along the river.

On Thursday afternoon, the American Duchess cruise boat was tied to one mooring and three trees on the Vidalia side of the river, because, the boat’s purser Ronald Shaw said, the water is too high for the boat to be tied to its usual moorings which are underwater on the Natchez side of the river.

Meanwhile, flooding has occurred in communities on the upper part of the Mississippi River due to heavy rainfalls and a levee breach in Davenport, Iowa, last week, and as the river is reaching record or near-record crests in Iowa, Illinois and northern Missouri, the Associated Press reports.

Leaders meet with CoreCivic officials to secure future of prison