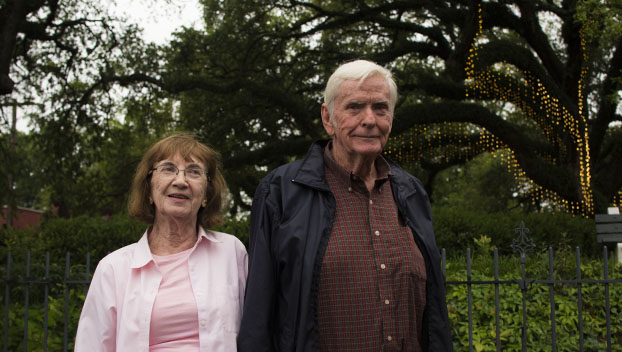 John Wright and his wife, Rosemary, were paying Natchez a visit from their hometown near Cleveland, Miss. (Nicole Hester / The Natchez Democrat)

NATCHEZ — John Wright has had two homes in his lifetime, the one he grew up in and the one that keeps calling him back.
When The Dart landed in Memorial Park outside of St. Mary Basilica Thursday evening, John and his wife, Rosemary, were visiting Natchez from their hometown near Cleveland as they often do, John said.
“I come back here every two weeks,” he said, “or at least that often. My wife is a history teacher, and she enjoys it too. I’m nearly 84 years old, you know, and I sometimes feel the need just to go play around, drive and eat and she goes along with it.”
John said he had taken a moment to stroll through the park and meditate a while before he and Rosemary went to a classical music concert at Temple B’nai Israel later Friday evening.
“I just came out here to walk around,” he said. “I love being outdoors, and I love Natchez — the trees, grass, statues, fountains and all of it.”
When he was younger, John said he moved away from the Mississippi Delta and started a job at the Armstrong Tire and Rubber Company in Natchez.
Being the good-looking bachelor he was, Wright said, the Natchez community welcomed him in with open arms.
“They adopted me,” he said. “Natchez adopted me.”
Rosemary said she and John went to school together before he moved to Natchez and weren’t associated with one another at the time. Years later, he was divorced, and she was widowed, and the two of them reconnected when he moved back to the Mississippi Delta, she said.
“I had my honeymoon here in Natchez, and he had his honeymoon here, but they were with different people at different times,” Rosemary said.
She and John have now been married nearly 30 years, she said, and still pay a visit to John’s second home.
“We both enjoy being here,” she said. “Though it really means more to him. I visited Natchez, but this is where he lived and had his first job. We come back about twice a month for him to come down memory lane.”

NATCHEZ — This year’s county-wide elections have drawn a lot of interest from not only election-watchers but also local politicians... read more