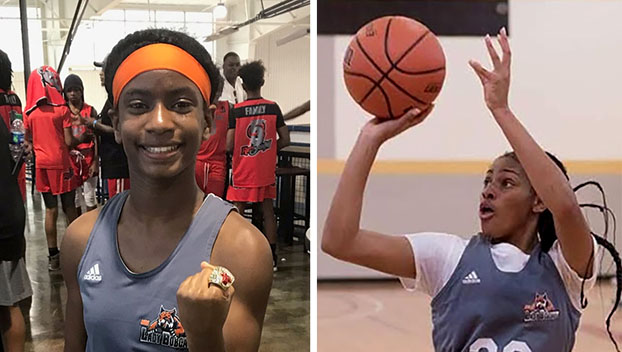 Vidalia’s Nyla Poole, above, and Franklin County’s JaSharreah Hunt, right, are on travel teams for the Flowood-based MHSP Bobcats. (Submitted)

For the Big One: Young players focused on future in college hoops

Two local girls compete nationally for love of the game, and collegiate exposure.

That’s where the Competitive Youth Basketball League USA comes in.

CYBL is an organization of more than 300 travel basketball teams for boys and girls, grade six and up from throughout the nation.

The Flowood-based MHSP Bobcats girl’s team is one of the CYBL organizations in Mississippi and two Miss-Lou players are on the team.

Natchez natives Eddie Young and Robert Wilson are co-directors of the Bobcats organization.

Hunt is a freshman and is playing in her third year with the Bobcats, Young said. Hunt plays point guard and shooting guard.

“She is a potential Division I player,” Young said.

“She’s a lockdown defender, we put her on their best player, she runs the offense and gets everybody involved and is ranked No. 12 in eighth grade CYBL ball,” Young said. “We work with the shoe company’s to provide gear for our players, we currently have a contract with Adidas. They are our sponsor. They provide our players with uniforms, shoes and book bags at no charge.”

Young said the goal is to organize the best players from around and have the teams play competitive three-day tournaments in front of college coaches, who are looking to have players commit to their university.

Young said he and the team have travelled to Dallas, Hammond, Louisiana, Chattanooga, Tennessee, and Tampa, Florida.

Young said the Bobcats would play in the Main Event tournament Friday, Saturday and Sunday in Benton, Arkansas.

“Hunt will be playing in this event, she has already played 15 games so far and is averaging 13.5 points, 6 rebounds, 4.2 assists and 5 steals per game,” Young said.

Young also stated how the basketball tournaments are put together.

“Each team plays in a pool of teams that play three to four games,” Young said. “After that you are seeded and placed in a bracket of 32 teams. The top seed plays the lowest seed just like in the NCAA tournament. This is a big one. There will be sports writers from around the country and more importantly for the players. There will be approximately 200 college coaches there.”