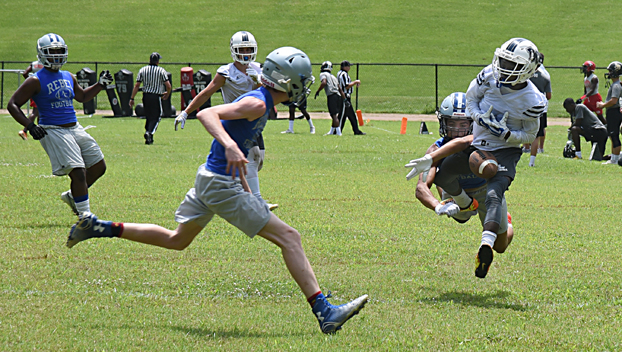 Children of Barr Brown and Johnny Rachal, volunteer football coaches at Trinity Episopal School who died within six months of each other, created the Barr and Johnny Foundation to honor their legacy and to help students with tuition. The foundation’s 6th Annual Barr and Johnny’s Flag Football 7-on-7 flag football tournament will be held on June 15. (File photo, The Natchez Democrat)

NATCHEZ — In 2014 the Barr and Johnny’s Foundation was created as a way to help fund elementary-aged students’ educations.

The foundation was created by the children of and in memory of two friends — Barr Brown and Johnny Rachal, who were both volunteer coaches at Trinity Episcopal School between 1996 and 2004, said Cole Brown, Barr’s son.

“Johnny coached offensive line, and Barr was geared more toward backs and receivers,” Cole Brown said of the two men, who both died within six months of each other in 2006 and 2007, Barr in a plane crash and Rachal of a heart attack. “They had a vision. They made a difference, and they loved all of the student athletes.”

Cole Brown said with the help of his siblings and Rachal’s children, the Barr and Johnny’s Foundation was born for two reasons: to further the legacy of their fathers and to make a difference in young people’s lives.

The mission is to continue the two men’s legacies by rewarding academically minded students with the opportunity to grow and excel.

On June 15, the 6th annual 7-on-7 flag football tournament will be played at Bobby Marks Stadium on the campus of Adams County Christian School.

“In 2014 we started out as just a fun flag football tournament for former athletes post graduation,” Brown said. “Now the tournament boasts nine area high school football teams so far, competing in an exciting 7-on-7 format.”

A round robin tournament with a double elimination format is how the games are contested.

“The games are on a 20-minute clock and the teams are on a 50-yard field. The clock runs down until we get to 2 minutes left, the games go real fast,” Brown said. “We will have MAIS referees out there who know how to ref a game.”

Last year the champions were the Ferriday High School Trojans, coached by Stanley Smith. This year they will return to defend their title, Brown said.

“We will travel this year with about 25 players, we will have seven on offense and another seven on defense,” Smith said. “I think everybody got to play last year. This is an excellent opportunity for local schools to get to play one another for the first time, and have bragging rights for a year.”

At the end of the day the Barr and Johnny foundation strives to be useful, responsible, and compassionate. To ultimately make an impact in a young person’s life in a way that will forever change their path for the better.

For the Big One: Young players focused on future in college hoops

By Tim Guercio Two local girls compete nationally for love of the game, and collegiate exposure. That’s where the Competitive... read more