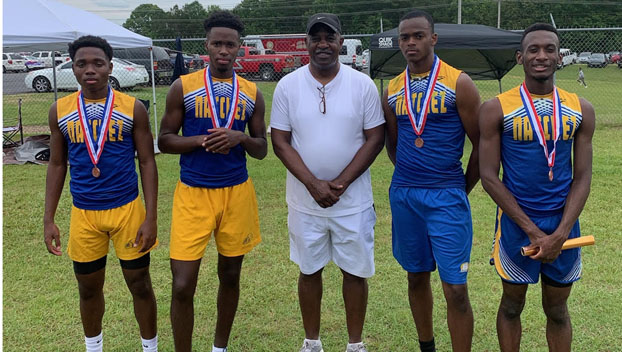 NATCHEZ — Natchez High School Bulldogs boys track team ran the 4×800 meters in 8:48.17 and finished third at the MHSAA 5A State Championships on May 3.

Zharia Barnes completed her career as a four-year letterman by making it all the way to the Championships in the discus throw and the shot put.

She finished fifth in the state with a throw of just over 99 feet in the discus, and she put the 8-pound shot 38 feet to claim fourth place in that event.

Track coach Larry Wesley said he and some of his state qualifiers traveled to Pearl on May 3 to compete at the Woody Barrett Track and Field Complex.

Not every athlete for Natchez high track, who qualified from the South State meet was able to compete in the State Championships, Wesley said.

“There were issues with the weather, and we had school activities,” Wesley said.

Credit will be the only member of that team returning next year, Wesley said, adding Credit is a sophomore and has a passion and intensity for what he does on the track and how he goes about it.

Miller, Hauer and James are graduating seniors and go out as three members of one of the best 4×800 meter teams in the state.

Wesley said he is proud of his team.

“We don’t need to go home without a medal,” Credit, who runs the last leg of the 4×800 meter, told his teammates before the last race

Wesley said he was impressed by Barnes’ improvement from her second meet of the year to her last meet at state.

“Zharia improved her discus throw from 78 feet early in the year to 99 feet at state,” Wesley said. “It was a pleasure to coach her for four years.”

By TIM GUERCIO THE NATCHEZ DEMOCRAT NATCHEZ — In 2014 the Barr and Johnny’s Foundation was created as a way... read more