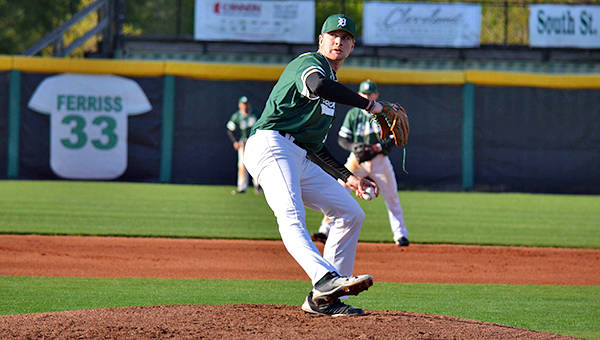 CLEVELAND, Miss. — Delta State’s game-winning rally wasn’t one for the ages, but it was effective.

The Statesmen used three walks, one of them with the bases loaded, and an RBI groundout to score twice in the top of the ninth inning Friday and beat Valdosta State 6-4 in the NCAA Division II South II Regional.

Delta State (41-12) won its sixth consecutive game and advanced to the championship round of the double-elimination regional. It will play Saturday at noon and must lose twice to be eliminated. With a win, it will advance to the super regional round next week.

Delta State beat Valdosta State (29-22) for the third time this postseason — it won twice in the Gulf South Conference Tournament — but had to work hard to do it.

Logan Stephens hit a solo home run to help Valdosta State take a 2-0 lead after two innings. Delta State then struck for three runs in the top of the fourth, and one in the fifth.

Weber Herbison hit an RBI double and scored on a single by David Herrington in the fourth inning, and C.J. Estave belted a solo homer in the fifth to put the Statesmen ahead 4-2.

Valdosta came back with runs in the seventh and eighth innings to tie it, but Delta State put together an ugly rally in the ninth to take the lead for good.

Herrington led off with a single and stole second. That was followed by a walk, a sacrifice bunt, an intentional walk to Estave, and finally a bases loaded walk to Matthew Majeur to bring in the go-ahead run.

John Russell then grounded out to short to bring in another run and make it 6-4.

Valdosta State had a chance to win it in the bottom of the ninth. It loaded the bases with no outs, but pitcher Tommy Childree escaped the jam with two strikeouts and a ground ball.

Childree earned his seventh save of the season. Dalton Minton (11-3) pitched eight innings for the win. He allowed four runs on four hits and five walks, and struck out six.

Keanu Van Kuren hit a bases-clearing double in the top of the 11th inning to lift Texas Southern past Jackson State in the Southwestern Athletic Conference Tournament.

Jackson State (31-24) was eliminated with the loss and saw its season come to an end.

Jackson State took a 3-2 lead on Tyler Culpepper’s RBI single in the sixth inning, but couldn’t hold it. Ryan Diaz hit an RBI single in the eighth to tie it again, and then Van Kuren’s three-run double in the 11th proved to be the game winner.

Rahman Williams and Chandler Dillard each had two hits and scored a run for Jackson State, and Culpepper was 2-for-5 with two RBIs.