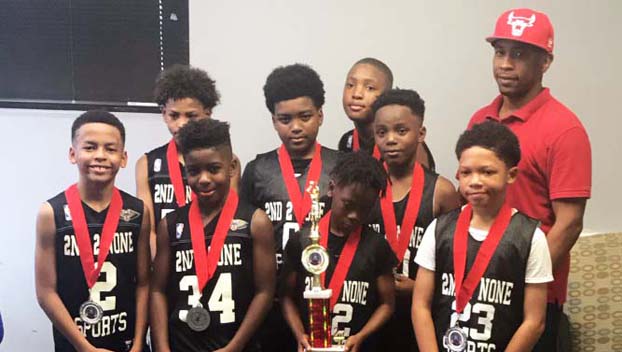 Warriors are 2nd 2None

NATCHEZ — The 2nd 2None Warriors traveled to Houston to play a basketball tournament on May 4-6 and came away with second place medals in the 8-10 year old division.

The Warriors, who are coached by Jeff Thomas of Natchez finished the tournament with a 3-1 record, losing their final game to a nationally ranked Houston team by 1 point.

The team is comprised of players from Natchez, Gloster, Vidalia and Ferriday and is part of the 2nd 2None Sports organization, organized and managed by Patrick Davis of Natchez, since 2002.

“We are preparing them to get the experience they need to play high school basketball,” Davis said. “We also stress academics. All of our players sign a contract that states they will keep their grades at a certain grade point average.”

The Natchez team starts play annually on April 1 and finishes the season on June 30, Davis said.

“We play in a tournament either once or twice a month, and we are hoping we can sign more players now to help finish the season,” Davis said. “We have traveled to Houston, Dallas, Baton Rouge and Starkville. At Mississippi State we played on their court.”

Thomas said it is difficult to compete with teams from big cities such as Dallas.

“We are going to Dallas this weekend to play in a round robin tournament, where these kids are the best of the best from there,” Thomas said. “We have to teach our kids to play hard and compete if we’re going to win.”