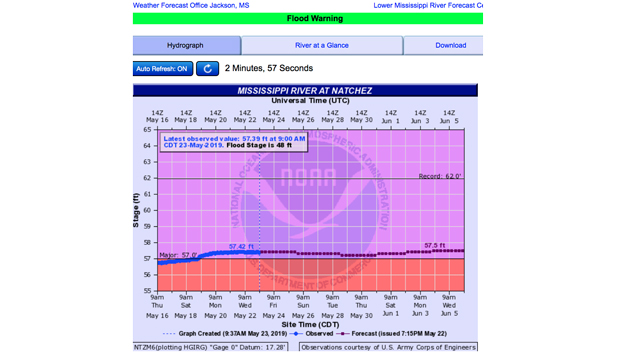 Latest Mississippi River stage projections at Natchez as of Thursday, May 23. (National Weather Service of Jackson)

NATCHEZ — The National Weather Service in Jackson raised the projected Mississippi River crest at Natchez on Thursday morning to 57.5 feet, which it is expected to reach on June 3.

The Mississippi River reached its last projected crest of 57.39 feet at Natchez on Tuesday, which is just below the March 11 crest of 57.83 feet, which was the third highest crest ever recorded at Natchez.

National Weather Service of Jackson hydrologist Marty Pope said earlier this week he does not anticipate the river level to fluctuate more than a percentage of an inch either way over the next several days, after which the river is expected to slowly start falling.

Pope said at current projections the river is expected to stay above flood stage at Natchez until late June and possibly into July.

NATCHEZ — Several local children will be onstage with Natchez Festival of Music Performers for the last musical production of... read more