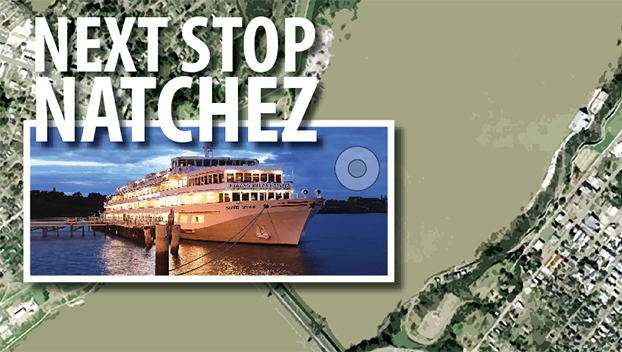 NATCHEZ — The City of Natchez on May 15 signed and submitted an agreement to lease property on the Mississippi River to Viking USA LLC for a new docking facility.

The Natchez Mayor and Board of Aldermen unanimously agreed to apply for approximately $9 million from a U.S. Department of Transportation Build Grant with a local match of approximately $1.9 million to fund constructing the ramp facility on the Natchez riverfront.

Natchez Mayor, Darryl Grennell said Viking’s desire to dock in Natchez could mean growth for the businesses Under the Hill and ultimately economic growth for the city.

“They are planning to dock here in Natchez, and that is important for this community,” Grennell said. “What this is going to do is open up the doors for the development in the Natchez Under the Hill area. … We could actually have a true riverfront. We could have additional business down there and recreational activities for visitors, and it also opens up the door for local people to utilize Natchez Under the Hill more so than they are now.”

Natchez City Attorney Bob Latham said the agreement that the Board of Aldermen unanimously agreed to sign is not the same as a hard lease as of yet, adding that the exact area where docks could be built has not yet been specified.

Within the six months of the agreement being approved by both Viking and the City of Natchez, Viking will conduct surveys of the property to determine where they will build the docks, Latham said.

The ramp could be located just south of Magnolia Bluffs Casino and accommodate up to three of American Cruise Line’s vessels, city officials have said.

The first of Viking’s three boats is expected to be completed in 2021 and the second boat in 2023 and each boat is expected to accommodate approximately 390 passengers.

The agreement states a docking lease — which would be signed subsequently to the agreement the Board of Aldermen approved — would last for 20 years from the day the first Viking vessel docks in Natchez.

Both Viking and the City of Natchez will work together to obtain any approval needed from federal, state or local parties, including obtaining building permits from the US Corps of Engineers, according to the agreement.

In the event any privately owned properties are required to complete the project, the agreement states the city, in conjunction with Viking, would “work in good faith to have the owners agree” to the terms of the signed agreement and the docking lease that would later follow.

The agreement also states Viking would add improvements to the property at their own expense, including the dock, ramps, utilities and any improvement necessary to make the property accessible from public roadways; and Viking would cover any maintenance and utility costs for running the new facility.

In exchange, the agreement states Viking “shall have exclusive right to dock at the property” and may enter into sublease agreements with other vessels.

For rent, each vessel using the facility would pay annual docking fees due on or before March 1 of each year to the City of Natchez. Those fees amount to $1 per passenger aboard Viking cruises as well as any other vessel authorized by Viking to use the dock.

NATCHEZ — Main Street in Natchez is filling up with craft jewelry stores, boutiques, art and cooking classes and... read more