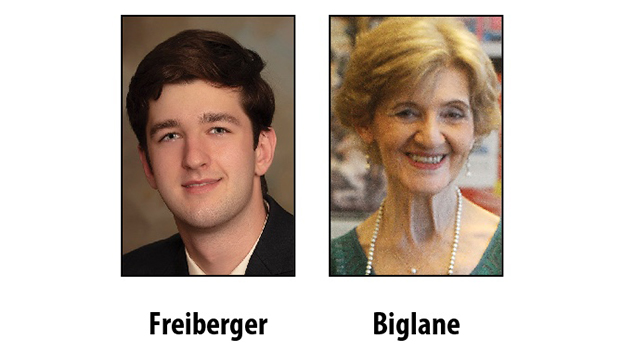 NATCHEZ — Cathedral High School’s 2019 STAR student said he had his sights set higher than being the best in his class; his high level of academic achievement would help him make it to an Ivy League university in New York City.

Cathedral High School’s Class of 2019 Valedictorian, Samuel Freiberger said he earned the distinction of being Cathedral’s STAR student with a score of 35 on his ACT exam, which is just one point shy of a perfect score.

Freiberger said he was far too busy looking into the nation’s top universities to shoot for a 36.

Freiberger applied to several Ivy League universities in hopes of receiving an acceptance letter from at least one, he said.

Freiberger’s efforts paid off, and he will be attending Columbia University this fall where he plans to study physics as a member of the John Jay Scholar program, which is awarded to a few dozen freshman at Columbia University out of more than 2,000 students based on their unique skills and academic achievements.

“They admitted 2,190 students this year out of a pool of just over 42,000 applicants,” Freiberger said. “It’s kind of crazy how the numbers have changed over the years. All of the Ivy’s used to admit 10 percent of their applicants and now it’s only about 5 percent.”

Though science is his passion, Freiberger said English is his second love and he chose Jean Biglane, his advanced English instructor, to be his STAR Teacher.

“She is the best English teacher in the history of humankind,” Freiberger said. “She teaches in a way that everyone should hope that their teacher would teach — by having discussions about what we read. Instead of lecturing us dryly for 50 minutes as some do, she asks us if we have any questions. Someone asks a question and the conversation leads us from one topic to the next one very naturally. You wind up learning so much more about the topic than you would trying to speed through notes in a Power Point.”

Biglane, who has taught off and on for a total of 33 years, said she could not speak enough words of praise for Freiberger’s performance at Cathedral.

“He is intellectual with a deep-seeded sense of justice and fairness, and he excels in every academic subject,” Biglane said. “I wrote a recommendation for him to several places … and I used the words ‘Renaissance man’ to describe him, because he has talents in every area. … He will often advocate a position that may not be his own just to see what will happen and to make us all think. … That is something we all benefit from.”

NATCHEZ — “Are you ready?” said Shane Blanton, Ph.D, executive director of the Mississippi Association of Independent Schools, as he... read more