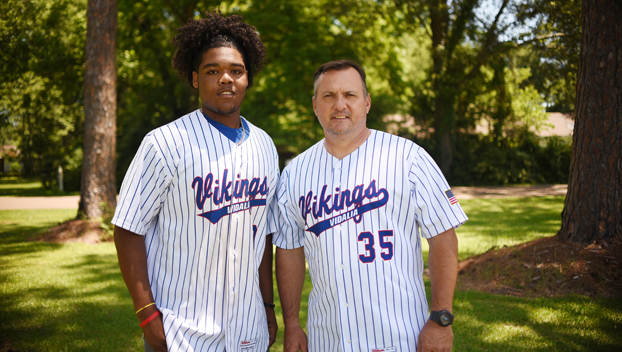 All Metro Honors: Baseball player and coach of the year

Chatman is a junior and will be back next year to suit up for his senior year.

Chatman played first base exclusively for the Vikings this year.

“After his sophomore year we knew he was going to be our starting first baseman this year,” Norris said.

Chatman batted .449 with 20 RBI and was named to the LHSAA District2-2A All-District First Team.

“I felt like we played hard all year, we had been working since last offseason on getting to the state championships,” Chatman said.

Norris said Chatman hit safely in every game except one.

“He was productive in every game this year,” Norris said. “We always try to bunt a runner over to second base or third, but we let C.J. hit away this year and drive them home,” Norris said.

With a winning record of 14-10, and having four players on the All-District first team and one on the second team Norris was surprised at being voted All-Metro coach of the year.

“I was surprised to get the award,” Norris said, “we coach but players still have to execute.”

Norris wanted to acknowledge his senior leaders on the team.

“Brandon Bozeman, Nick Melton and Dom Harveston,” Norris said. “These guys would put a bunt down when we needed to, and they chose to come out to the practice field to work hard and sweat every day.”

Players who made the Natchez Democrat’s All-Metro Baseball First Team for 2019 are:

All Metro Honors: Softball player and coach of the year