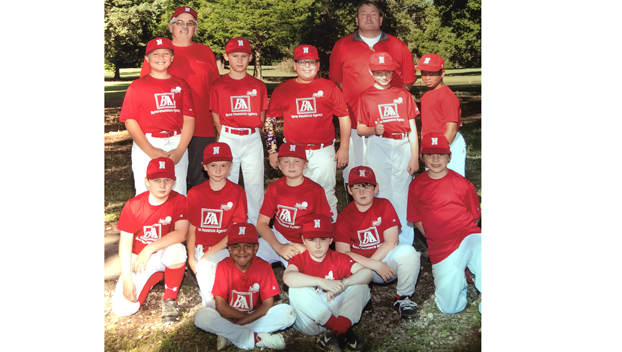 The team finished the year off with a big come-from-behind victory over Natchez Salvage 8-6 to cap off a perfect season at 12-0.

Byrne Insurance was down 5-0 in the first inning but rallied and got the win and preserved their perfect season.

“We had five pitchers that we used this year and all of them did a good job,” Dossett said. “We practiced a lot of pitching and hitting the whole year.”

The team kept and recorded stats for every game this year.

Leading the team in batting average with .696 is Caden Kossum. Caden struck out only twice this year.

“Caden is real consistent and threw a lot of strikes.” Dossett said.

Parker Dossett batted .654 and won two games as a pitcher. Parker also played catcher throughout the year and threw out a lot of runners trying to steal. Dossett said.

Aiden Barnes won 4 games as a starting pitcher to lead the team in wins and was at shortstop when he wasn’t on the mound. Aiden also batted .503 when he was at the plate.

Tamihana Starr batted .402 and was a 3 game winner, hurling from the mound. When he wasn’t pitching he played first base.

When talking about the perfect season Starr was in disbelief. “I was surprised and shocked, I didn’t expect to go that far,” Starr said.