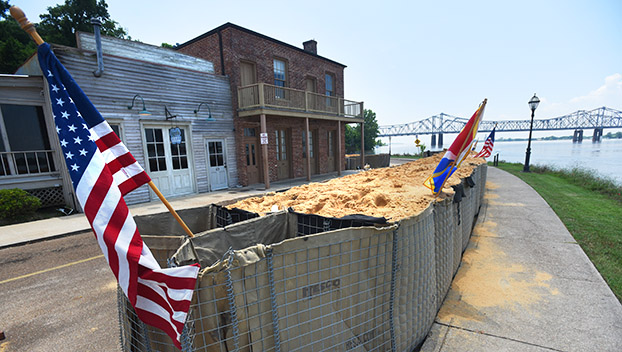 Forecast for heavy rain may add to flooding woes

NATCHEZ — Local officials are keeping one eye on the river, and another eye on the sky as the Miss-Lou deals with flooding along the Mississippi River and the prospect of additional rain.

The National Weather Service on Monday reduced its predicted crest for the river in Natchez by 6 inches to 58.5 inches. The predicted crest date has also been moved from June 10 to June 13.

The reduction of the crest is good news for Vidalia Mayor Buz Craft and Natchez Mayor Darryl Grennell.

“What I am not ecstatic about is the weather forecast for the upcoming week,” Craft said.

The National Weather Service in Jackson said in its weekly weather briefing Monday that a disturbance in the Gulf of Mexico will increase chances for heavy rainfall in the Miss-Lou, northern Mississippi and Tennessee. The rain is predicted for the latter part of the week into the weekend.

“This will bring heavy rains to portions of the area that have seen heavy rainfall in the last several weeks and months,” National Weather Service Meteorologist Nicholas Fenner said.

A 70 percent chance of rain and thunderstorms is predicted for the area Thursday and Friday.

Additional rainfall in Arkansas and the north Mississippi River basin could affect the future river forecasts, which only take into account the next 48-hours of predicted rain.

Craft said he and town officials are keeping an eye on the weather daily and are confident that the town is prepared.

“We have to see how the rain falls and what part of the river it falls in,” Craft said. “We will have several days to plan whatever happens. If they change the crest upward, we will take action as need.”

As far as the prediction of heavy rain is concerned, Craft said the town is making sure storm drains are clear of trash and debris to help mitigate any flash flooding.

Monday marks the 150th day the Mississippi River has been above flood stage in Natchez.

Fifth Louisiana Levee District President Reynold Minksy said the levees up and down the river continue to perform well.

While the slides will require significant repair, Minsky said, “it is nothing that is threatening the integrity of the levees.”

“That is phenomenal,” Minsky said.

A series of relief wells installed by the Corps of Engineers are primarily responsible for the significant reduction in sandbags, Minsky said.

Like Craft, Minsky said he is keeping an eye on the weather and is concerned about the prospects for more rain this week and into June.

“The area crops need the rain, but hope the total amount of rain is not severe,” Minsky said.

VIDALIA — The Vidalia Board of Aldermen approved an operating budget for the 2019-2020 fiscal year Thursday evening during... read more