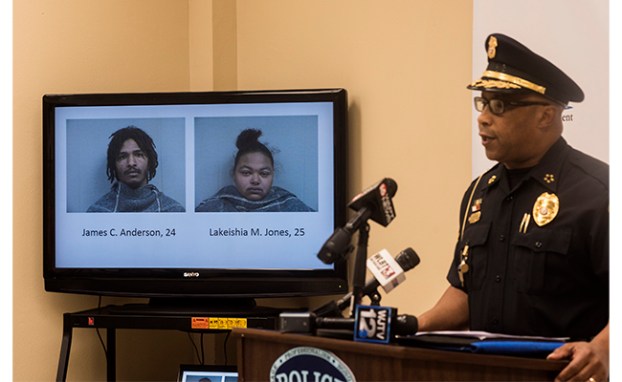 NATCHEZ — The 3-year-old sister of a 4-year-old girl who died last Wednesday of alleged abuse is still recovering in a Jackson hospital from injuries she received, police said.

Both Jones and Anderson were still detained in Adams County Jail as of Monday, while the Natchez Police Department in conjunction with the Mississippi Department of Child Protection Services are still investigating causes of the children’s injuries, law officials said.

Natchez Police Chief Walter Armstrong said the 3-year-old girl is being treated at the University of Mississippi Medical Center and is still listed in critical condition but seems to be recovering.

“She is still being treated for life-threatening injuries to her body,” Armstrong said. “There has been some progress with her prognosis and she appears to be on the road to recovery. However, she is not out of the woods yet. She has severe injuries that would have to be treated with multiple procedures going forward.”

Armstrong said Anderson and Jones would be assigned attorneys today and could be scheduled for a preliminary hearing within the next two weeks.

Lea Anne Brandon, director of communications for MDCPS, said two reports of abuse involving the children were received since December 2018.

“The first was an anonymous report that was called in December of 2018 that was investigated,” Brandon said. “Our investigator talked to the children and also their mother. At the time, they reached out to (Anderson) to see if he was at the home, but they were unable to substantiate that allegation. There were conflicting explanations for the injuries and the bruises.”

In January, Brandon said a second report was called in by a medical professional when the children were brought to a clinic by their grandmother for an injury.

Initially, it was thought the mother had hit the child with a walkie-talkie toy the children had been playing with, but the child led investigators to believe it was her sister who hit her, Brandon said.

“There were some safety concerns with the house,” she said, “There was a heater in the front room that was missing a guardrail where a child could burn herself, but that was repaired. … We typically leave a case open for 90 days, and we actually kept this one open a while longer.”

Brandon said MDCPS closed the case on June 4, the day before Hill’s death.

Both girls were being watched under Anderson’s supervision while Jones was away from her residence at 1401 Lafayette St., Armstrong said, adding Jones stated both girls were fine when she left Wednesday morning.

Later that morning, Anderson allegedly walked with the girls for a quarter of a mile from the residence to Holiday Apartments where his mother lived, Armstrong said, during which time the girls were badly injured and one of them had trouble walking.

Capt. Scott Frye, investigator with the Natchez Police Department, said both murder and felony child abuse charges are punishable with life sentences. However, a murder conviction would require proof of an intention to kill another person while a conviction for felony child abuse only requires proof that the children were beaten.

Armstrong said investigators would meet with MDCPS workers today as well as continue questioning friends and family members of the children until the case is resolved.

“I anticipate after this meeting, we will have a better understanding of the past history of these children,” Armstrong said. “We want to look beyond these two individuals who were arrested. … We are going to follow all leads and talk to all persons who have had custody of these kids for both long term and short term. It’s quite apparent to us that these children have not been well cared for, we just don’t know to what extent and by whom.”

VIDALIA — Concordia Parish deputies arrested a Vidalia man and his wife for cruelty to the infirm and false imprisonment for... read more