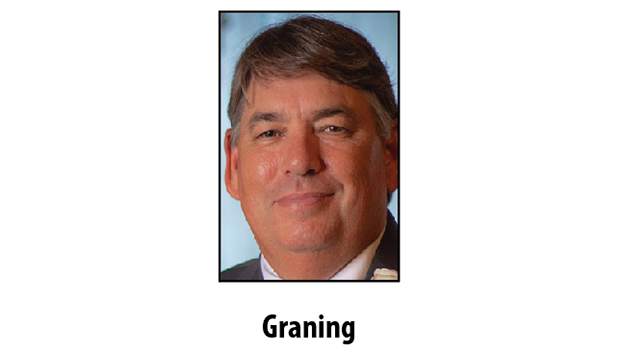 NATCHEZ — Ward Graning may not have been the biggest player on the field, but he had a lot of grit, Tom Graning said of his older brother who died unexpectedly at the age of 57 at his home Saturday.

“He started at quarterback I think as a sophomore or junior and played sophomore, junior and senior year,” Tom said. “He was never the biggest kid on the team.”

Ward’s grit later led him to walk on to Alabama’s Crimson Tide football team under the leadership of coach Bear Bryant.

“He never actually saw any game action with Alabama, but he was on the squad,” Tom said. “He was there when Bear Bryant won his 315th game (Nov. 28, 1981, 28- 17 win over Auburn), which was at that time the all-time winningest coach in college football history, so he was part of that. That was a big, big milestone, and it was a very big accomplishment. He wasn’t always the biggest person out there. He was actually the smallest person out there probably. He had a lot of grit and a lot of will to play.”

That same determination was evident in Ward’s life when he later returned to Natchez to work in the Graning family’s oil business, Tom said.

After Tom, who is three years younger than Ward, returned from college a few years later, the two brothers went into business together purchasing a store from his father’s family business in 1990 and running it together as the Go-Mart at 4 Seargent S. Prentiss Drive across from Natchez Ford.

“We operated in there for about 10 years,” Tom said. “It was a small store — very, very, very small store. We did a lot of different things. It was … somewhat of a full service station for a while with a local convenience store. We did a lot of car washes, changed tires, all that kind of stuff, oil changes, and then we ended up tearing that down and rebuilding the current store in 2000, and changed from Exxon to Chevron. We’ve been here ever since.”

Beesley said he had known Ward since Ward was in high school and remembers when Ward, who was approximately 10 years older than Beesley, was the quarterback on Cathedral’s football team coached then by Beesley’s father.

“I was in elementary school,” Beesley said. “I enjoyed getting to watch him play football.”

“He was just such as caring and giving person,” Beesley said. “He is going to be missed by the community, Cathedral and all of his friends.”

Tom agreed, saying Ward was loved by many of their customers at the Go-Mart who have been visiting in the days since Ward’s death to express their condolences.

“He was just a great guy that would do anything for anybody,” Tom said. “It didn’t matter who it was, and he always took care of his family. It was family first for him and he helped mold his daughter. She’s a great student — he and her mother — she is a wonderful athlete and a wonderful kid.”

Tom said he hopes people will remember Ward as a family man and for his love of the community.

In addition, Tom said he would always remember Ward as a great business partner.

“It doesn’t get much better than him as a business partner,” Tom said. “We’ve been in this thing together for so long. He had his things he did, and I had my things I did, and he was pretty good at the things he did. … We’ve had an outpouring of support coming in here since then with customers just hitting them hard, and he will be missed here with the family and with our store and Natchez.”

VIDALIA — Concordia Parish deputies arrested a Vidalia man and his wife for cruelty to the infirm and false imprisonment for... read more