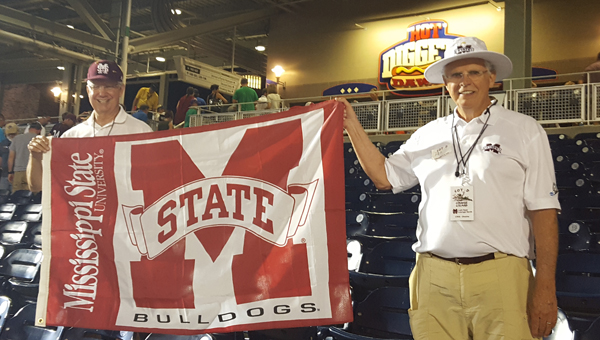 The college baseball World Series played in Omaha, Nebraska, every year is 804 miles from Natchez.

If Mississippi State University is in the tournament then you can believe that Pat Burns and Scott Kimbrell of Natchez will be there, too.

“It’s a 13 hour drive from Natchez, so instead we drive to Jackson and fly to Atlanta and then to Omaha,” Burns said.

Both men are graduates of Mississippi State University, Burns in 1968 and Kimbrell, a semester later in 1969, Burns said.

Burns said this is his sixth trip to the College World Series to watch the Bulldogs, the first time being in 1985. Kimbrell said this was his fourth trip to Omaha.

The two friends said they have been lucky enough to travel to T.D. Ameritrade Park together three times: in 2013, 2018 and this year, to attend the games and root for their beloved Bulldogs baseball squad.

T.D. Ameritrade Park, a state-of-the-art facility where all of the College World Series games are played, replaced historic Rosenblatt stadium a few years ago.

The two sat through and watched Sunday MSU vs. Auburn game with MSU not being able to get things going and headed to the bottom of the ninth inning down 4-1.

“Twice we had the bases loaded and couldn’t score,” Kimbrell said, “and Mississippi State leads the nation in come-from-behind wins with 27 or 28.”

In typical fashion the Bulldogs got runners on base; but then drove them home to tighten the score.

The hero was Marshall Gilbert who came to the plate 0 for 4 on the night and with the bases loaded for him.

Gilbert delivered as he drilled a single up the middle to drive in the last run the Bulldogs needed for another State come-from-behind win.

“You can’t imagine how exciting it was,” Kimbrell said, “to be there and to see it.”

Concordia Dixie Youth All Stars are in play

By TIM GUERCIO THE NATCHEZ DEMOCRAT VIDALIA — You can hear the baseball sounds of catchers mitts popping and the... read more