Closed bridge on Hutchins Landing Road to get fix 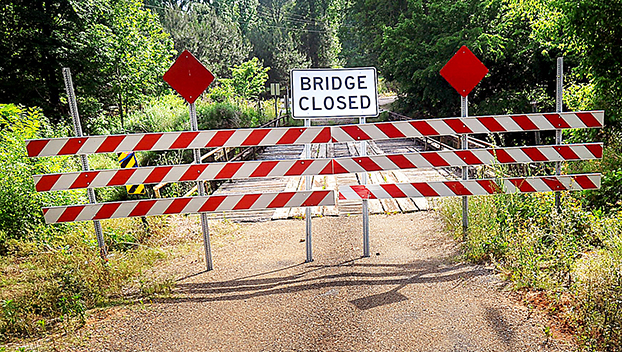 Ben Hillyer | The Natchez Democrat The bridge on Hutchins Landing Road at Hutchins Creek is one of the bridges in Adams County that is closed because it has been identified as unsafe. (Ben Hillyer/Natchez Democrat)

NATCHEZ — A “permanent fix” is in the near future for a bridge on Hutchins Landing Road, which has been closed for more than a year with safety concerns, Adams County officials said.

The Adams County Board of Supervisors during Monday’s regularly scheduled meeting accepted a $736,243.88 bid from Jordan, Kaiser & Sessions LLC to remove the remnants of the deteriorating bridge and replace it with a concrete box culvert.

Supervisors said the bid was well under the state’s provision of more than $1 million for the project.

District 1 Supervisor Mike Lazarus said the supervisors lobbied to secure state funding for the project with no expense to the county to replace the bridge.

“The bridge had to be closed because it was in too bad of a shape for people to travel on,” Lazarus said. “The boards were deteriorated, and it was beyond repair. It would’ve cost more to fix it than it would to replace it completely.”

After approval from the county engineer, Jim Marlow, Lazarus said the replacement of the bridge would commence as soon as possible. Lazarus said he anticipates it could be done start to finish in just a few months.

Since the bridge’s closure, Lazarus said between 20 and 30 residents and travelers on Hutchins Landing have had to take an approximate 10-mile detour around the closed bridge to get to their houses or to visit parts of St. Catherine’s Creek National Wildlife Refuge.

“It’s an important bridge,” Lazarus said, “and hopefully this project will fix it so we won’t have to worry about it anymore for a while.”

4Unanimously approved use of Adams County Sheriff’s Office vehicles and deputies in filming “Breaking News in Yuba County,” which is currently being filmed in Natchez.

4Unanimously rejected bids for work at Providence and Lagrange parks.