Park service staff asks ‘What if?’ about future of visitor center 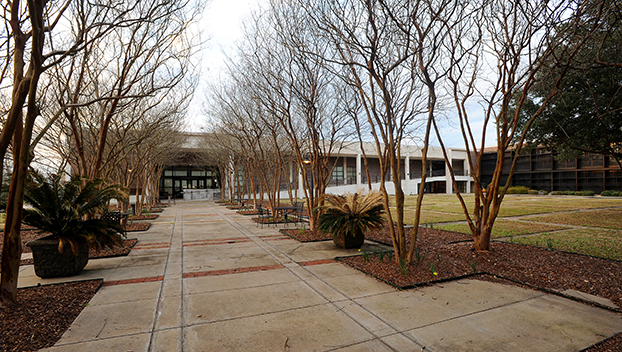 NATCHEZ — On July 23 the City of Natchez will formally transfer ownership of the Natchez Visitors Center to the National Park Service. (file photo)

NATCHEZ — What if the Natchez Visitor Reception Center looked more like an Apple Store?

What if the future use of the building took inspiration from the retail and marketing industry?

What if the visitor center experience focused on the future as much as it concentrated on the past?

The National Park Service staff has been asking a lot of “What ifs?” lately as the final transfer of the visitor center from the City of Natchez to the park service makes its way through various government channels.

Natchez National Historical Park Historian Jeff Mansell discussed the questions he and the NPS staff have been asking with the Rotary Club of Natchez on Wednesday.

When the final transfer is complete, Mansell will be managing the day-to-day operations of the visitor center.

“In eight months perhaps as long as a year, we will be owning the building,” Mansell said.

As to an exact date, Mansell said, “Your guess is as good as mine. The process is now at the Lands Office of the Department of the Interior.”

With the official transfer months away, Mansell said the staff has turned its thoughts to the future of the center.

“How do we improve the visitor experience when they come to Natchez because most visitors start (at the visitor center),” Mansell said.

The most immediate changes will be changing the signage of the building and at its entrances.

“We want people to make sure that when they come to the visitor center that they know it is owned by the National park Service,” Mansell said.

Other changes to the center and how it will work are in the idea stage and have not been finalized.

“What we have been asking is what if,” Mansell said.

The location of the visitor center gift shop is one example, Mansell said.

Inspired by the retail and marketing industry, Mansell said the staff considered moving the gift shop from the back of the visitor center to the front.

Mansell said the staff has also looked a remaking the visitor center experience.

Mansell joked that the current experience is like that of a rental car agency or airport terminal, where customers line up one-by-one to talk to agents sitting behind a counter.

“What if we re-envisioned it and brought it into the 21st century,” Mansell said showing an image similar to a modern retail store where customers meet with visitor center staff, not behind a counter, but holding an iPad.

“There is no barrier between you and the person who is trying to help you,” Mansell said. “People are working with you using an iPad or a kiosk rather than having you step over to a counter.”

A new modern open visitor center lobby would allow people to look out to the expansive view of the Mississippi River, Mansell said.

One change that Mansell said is coming is a new movie that will replace the original Natchez Story that has been showing since the visitor center opened.

“We will have a new film that will present a more forward-looking vision for Natchez and for the tourists who will come here,” Mansell said.

Other changes under consideration include additional exhibits that tell the story of Fort Rosalie using the thousands of objects that have been discovered by archeologists on the site.

“We have been doing archaeology at Fort Rosalie for 20-plus years, almost as long as the park has been around,” Mansell said.

Information panels and an exhibit of maps are also being considered for the space.

Mansell said the center would ultimately lead visitors up the center’s ramp and out to the Fort Rosalie site which is steps away from the visitor center.

Mansell said the park service is also looking at what to do with the existing building on the Fort Rosalie site.

The remainder of the Fort Rosalie site will remain a “passive area” that helps tell the story about the place, Mansell said. Most of the site would remain as park and walking trails, including what is left of the French fort that stood on the grounds, Mansell said.

“We want it to be a place of quiet contemplation about what took place there,” Mansell.