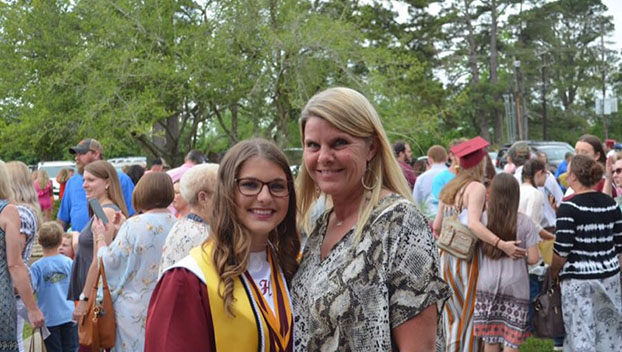 “It’s weird, not knowing what to do in the summer,” Mallory Barlow said. “I’m used to always being at camps or going on trips during the summer.”

However, Barlow said she knows next fall isn’t going to be easy.

Barlow, the daughter of Donnah and Lane Barlow, received a full-ride to Louisiana State University in Shreveport this fall, where she plans to major in cellular and molecular biology with a concentration in pre-medical studies, she said.

“My mom is a nurse practitioner, so I’ve always been exposed to the medical field,” Barlow said, “and I’ve been around surgical procedures before and have always been fascinated by it. I know it won’t be easy but think I could do it too, so I’m going to try.”

Barlow said she scored a 30 on her ACT exam, a standardized test required by most universities, and earned multiple scholarships to LSUS.

Barlow received the Louisiana Scholarship that pays fees, tuition and offers a $1,200 stipend each year, the TOPS academic scholarship and the Carroll Hoffpauir Endowed Scholarship among other miscellaneous awards.

Barlow was also voted the 2018-2019 Student of the Year at Monterey High School.

Barlow said the two months of downtime she has before moving to LSUS have given her time to look forward to a brand new freshman experience in a new place.

“I’m looking forward to being in a new place and meeting new people,” Barlow said, “but I’m a little nervous about it. In Monterey, everyone knows everybody already. Stepping out of my comfort zone in a new crowd is not something I’m used to.”

Blown over: Storms down trees, knock out power across area