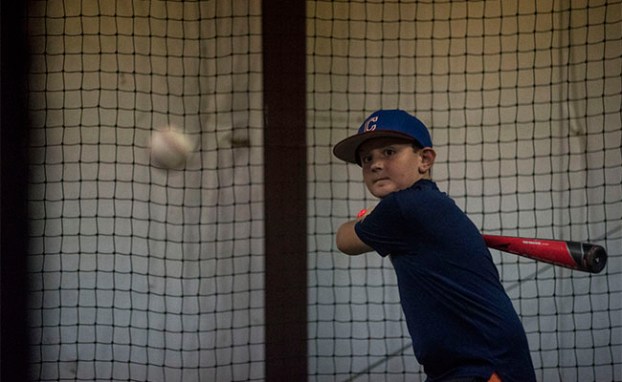 Gabe Wallace swings at the ball during the all-star team's practice Tuesday at Double Play in Natchez. (Nicole Hester | The Natchez Democrat)

The team traveled to Jonesville and competed Saturday and Sunday and came away with a 2-1 record in the round-robin format to advance in Louisiana tournament play.

The Concordia team had wins by beating the Delhi team 14-5 and the Jonesville team 14-2 with one loss to the Winnsboro team 11-8.

The Sub-District tournament was won by a team from Winnsboro, as they beat everybody in the four team tournament and posted a record of 3-0.

Next up for team Concordia 7 and 8 year olds is another away date, this time they travel to Winnsboro, whose undefeated team will get to host play in the District Dixie Youth tournament.

“This tournament in Winnsboro will be a 12-team, double-elimination tournament,” said Larry Davis assistant coach. “Our first game is 7 p.m. Thursday against East Carroll from Tallulah.”

Some of the top hitters on the team from the Jonesville tournament are Jackson Shirley who was 7 for 9 with 3 doubles and 1 triple. Bryson Thornton who went 7 for 9 with 1 triple and Lane Davis who batted 6 for 7 with a triple.