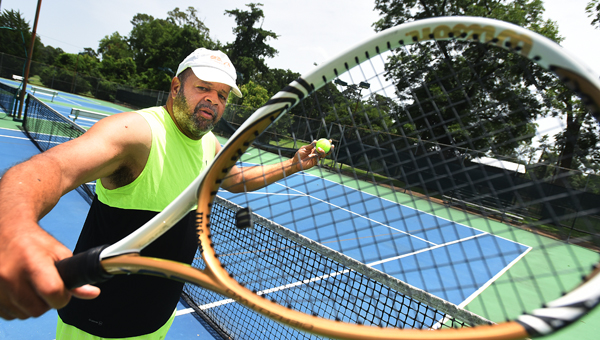 Herman Ransom was first introduced to the game of tennis in 1969 as a 13 year old. Ransom is now teaching what he knows about the game to young people who are showing up to learn tennis at the summer camps at the tennis courts in Duncan Park. (Ben Hillyer, The Natchez Democrat)

NATCHEZ — Herman Ransom said he was first introduced to the game of tennis in 1969 as a 13 year old growing up in Natchez.

Now Ransom is teaching what he knows about the game to young people who are showing up to learn tennis at the summer camps at the tennis courts in Duncan Park.

Ransom said he didn’t have much of a choice but to learn the game, because his next-door neighbor was Henry “Hawk” Harris when he was growing up.

Ransom’s brother had been hitting tennis balls with Harris, and it was just a matter of time until Harris caught up with him and put a racquet in his hands, too.

That introduction would alter the course of Ransom’s life and the way he goes about it.

Ransom said he loves introducing the game to people, and in particular young people, mentoring them and teaching them to play the game he loves to play.

“When I first started,” Ransom said, “we played at the Natchez Youth Center, which joined up to the North Natchez High School property. We had asphalt courts and cyclone fencing nets.”

Ransom was a good enough player, he said, to move on to play on the tennis team at Tuskegee Institute in Tuskegee, Alabama.

“In the summers we would be back from college and would go back out there to play,” Ransom said. “Guys like Doug Lambdin, Leon Ridley, George West Jr., Barry Scoby and Buddy Massey.”

Ransom came back after college in 1978, he said, to find Harris teaching tennis to a bunch of young children at the youth center where he learned the game.

Ransom said he joined in to help the process.

“Any kid that would show up, I would introduce them to the game of tennis and hit with them,” Ransom said. “If we didn’t have enough racquets, Henry Harris did.”

Ransom said that he has been back in Natchez for the past 10 years and can be found playing doubles at Duncan Park and still teaching and sharing information at the summer tennis camp for young people.

“Thanks to Hawk Harris there have been 20 to 30 kids from here who have gone to college on tennis scholarships, schools like Jackson State, Alcorn, and Russ College in Holly Springs, Mississippi,” Ransom said.

By TIM GUERCIO The Natchez Democrat NATCHEZ — The Concordia 7- and 8-year-old coach-pitch All-Star team has advanced in Louisiana... read more