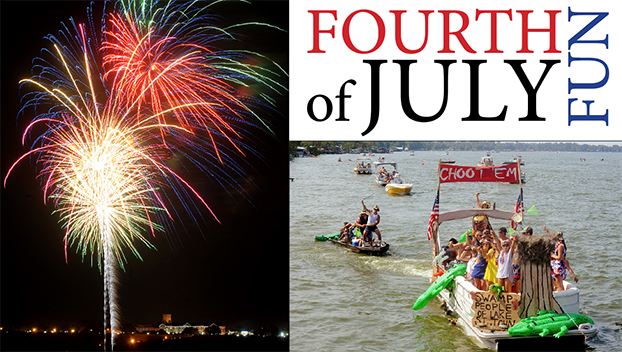 A flotilla, which by definition is a fleet of warships that are perhaps surrounded by the boom and flashing lights of cannons, has a different meaning to the Miss-Lou on the Fourth of July weekend, and the loud booms and flashing lights are signs of a celebration instead of warfare.

There are two opportunities to celebrate Independence Day in the Miss-Lou community starting with a Fourth of July festival on Thursday, July 4, and the Lake St. John Flotilla the following Saturday, and, yes, both events will have fireworks over water.

“That is one thing that I am particularly excited about,” Doré said. “Folks can learn the meaning of the flag retirement ceremony and witness all that it entails.”

Doré said festival entry is free with individually priced booths and activities and provides an array of entertainers, from musicians to patriotic baton twirlers and dancers.

“We have 40 vendors this year,” Doré said, “with a wide array of all the food you can imagine, local artists and crafts makers, makeup, jewelry, clothing and everything you can think of there on the festival grounds. It is free to attend the festival and it is the best community event imaginable. … We’re going to have three bounce houses divided into age groups, and with a $5 wristband you can bounce all day to your heart’s content.”

Doré said several local businesses chipped in to provide a fantastic prize selection and giveaways for participants of all ages.

“We’ll have several prize booths, games and contests,” Doré said. “We’ll have a most patriotic dress contest for any age group that is crowd judged, so bring your most patriotic costume you can find and your cheering squad.

“Because we don’t want anyone to be left out, we will also have a contest for most patriotic pet as well,” Doré said. “As long as you can carry it or put it on a leash, dress it in red white and blue.”

The winner of the Vidalia Police Department’s “Red White & Lose” 12-week weight loss challenge would also be announced during the festival, Doré said.

The festivities conclude with a firework show finale on the Mississippi River after dark, Doré said, which can easily be viewed from the Vidalia Riverfront or the Natchez Bluff.

“It is going to be a spectacular show this year, so if you’re not already on the riverfront at dusk you should be making your way there. Once the sun sets, the boat will head out on the Mississippi River.”

Following the traditional blessing of the fleet, where the Rev. John Pardue will offer up a prayer for the parade of vessels to have a safe voyage, boats of all kinds — or anything that floats and can maintain parade speeds — will set sail, said flotilla chairman, Donna Maroon.

“People enjoy seeing the decorated floats and the fireworks at night are beautiful,” Maroon said. “This event is the perfect way to get everyone together for a holiday weekend. This is our 27th year, so this tradition is a long-time local favorite. …

Viewing the flotilla and fireworks is free, Maroon said, adding that T-shirts and large lake flags are available for purchase at Lake St. John Grocery, Ramey’s and Spokane Resort. Youth sizes are $15 each, adult sizes are $20 each, tank tops are $25 each and flags are $70 each, Maroon said, and any money left after expenses for this year’s festivities is used for upkeep and maintenance on Lake St. John and provides funding for the following year.

“The public is welcome to stop by Spokane Resort and watch the Flotilla for free,” Maroon said. “It’s a nice day for everyone involved, and I hope people will come and be a part of it.”

There are prize categories for vessel operators of both small and large, decorated and undecorated boats that choose to participate in the parade. However, all boats must be registered to be eligible for prizes, Maroon said.

Boat registration lasts from 9 a.m. until noon the day of the parade and costs $10 per vessel regardless of size, Maroon said.

“Decorated boats will be judged in categories of patriotic and non-patriotic,” Maroon said. “The overall winner will receive a life ring, a framed poster, cash money and other large prizes.”

The competition and winners will also be broadcast on Natchez Radio Group stations, Maroon said.