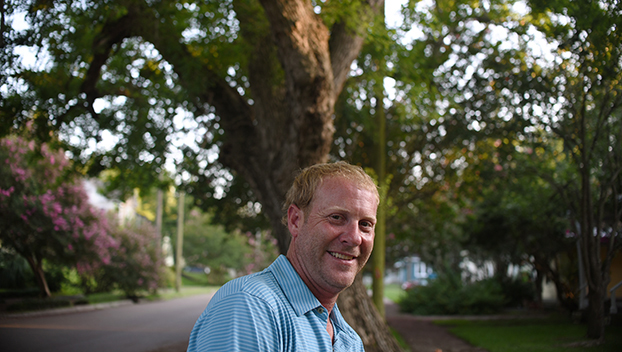 When he is not keeping up with his son, Michael Faust enjoys racing cars. (Nicole Hester / The Natchez Democrat)

The Dart: Natchez man loves life in the fast lane

When The Dart landed in downtown Natchez, Faust was supposed to be racing but after getting rained out he found himself hanging out in the neighborhood.

“I’ve always been into race cars,” Faust said, “since the 90s when I graduated high school.”

Faust who is originally from Natchez has been racing for the past 10 years with a group of his friends.

“There used to be about 25 of us,” Faust said. “We would all go around and race everywhere. It kinda dwindled down. Of us now, it’s a group of about five or six.”

Faust owns several different types of race cars from Camaros to Corvettes. Recently, he invested in a Chevrolet.

“You get a bunch of people together you know and go racing,” he said.

Racing is fun, especially when you get to visit racetracks across the region.

Faust said he and his friends have raced all over Texas, Mississippi and Alabama. It wasn’t just on paved tracks either. Faust said they would go mud and dirt drag racing as well.

“When you’re racing your buddies it’s different because you’re just trying to beat them,” Faust said, “I’ve never gotten bored with it.”