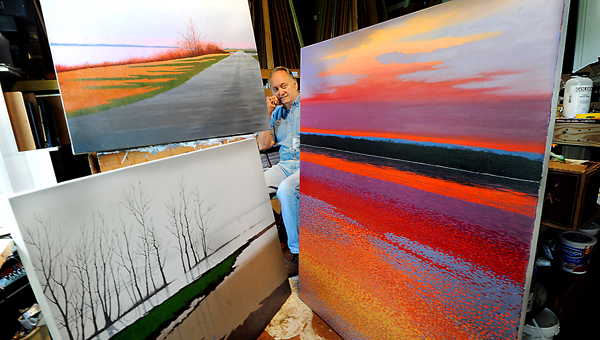 Ben Hillyer | The Natchez Democrat Rolland Golden, an artist who lived in Natchez, was awarded the visual arts award from the Mississippi Institute of Arts and Letters for his exhibit, “River and Reverie — Paintings of the Mississippi River.”

I have the greatest admiration for artists who can transform the ignored, often-overlooked facets of life into extraordinary, almost surreal works of art.

Painter Rolland Golden was one such artist — a man who took as much delight in road signs and the painted lines on a country road as he did the vivid colors of a Mississippi River sunset.

Golden died on July 1 in Folsom, Louisiana. He was 87.

My first introduction to Golden and his work was in 2006 when retired art gallery owner Jerry Dixon organized a holiday tour of artists’ studios.  Golden had moved with his wife Stella to Natchez after being forced out of their Louisiana home by Hurricane Katrina.

On the day I met Rolland for a preview of the tour, he and his wife were nearing the completion of a studio addition to their St. Charles Avenue house. The studio would be the center of creativity for Rolland until the couple left Natchez in 2014.

Waiting for the studio floors to be finished, Rolland had artwork scattered throughout the house. Many pieces were leaning against walls, waiting to be stored in the studio’s racks.

A walk through Rolland’s house that day was a private Rolland Golden retrospective, with more than five decades of his paintings on display.

By the time he moved to Natchez, Rolland was an internationally acclaimed artist, his work exhibited in more than 100 one-person shows and collected worldwide.

In 1976, Rolland and  his American realist paintings were chosen to represent the United States in an exhibition that toured Soviet Russia.

Many of Rolland’s paintings were what Rolland called “borderline surrealism,” using unrelated elements like checkerboards, chess pieces and marbles.

Art critic John Kemp said in 2015 when Rolland was selected to receive a Louisiana Legend award, “He paints the everyday world around you, the ordinary. It’s the minutiae of life that you see.”

One of my favorite paintings I saw that afternoon was a painting of downtown Clarksdale. The picture is dominated by the lines of a sidewalk bordering a vacant parking lot. In the foreground is a pattern of vertical yellow lines in the lot entrance provides a graphic counterpoint to the side of a red brick store in the distance.

In another painting, a bright orange sky is reflected in crisscrossed tire tracks in the snow of a farmland scene.

“I think what he does is he teaches you how to see the world around you,” Kemp said.

I learned that lesson and more when I met Rolland and Stella that November afternoon.

Even as I enjoyed the personal tour of Rolland’s work, our conversation was as much an education on how to be an artist as about any of the individual paintings.

Rolland taught me the importance of being an advocate for the local community and for myself, as an artist.

That afternoon, Rolland offered a listening ear, encouraging words and an optimistic vision for the arts in Natchez.

Soon after moving to Natchez, Rolland opened a gallery on Main Street. Until it closed at the end of 2013, the gallery was a favorite spot for a lively conversation on Second Saturdays when he and neighboring galleries opened their doors for local art lovers.

A May 2019 guide to Rolland’s later work at the Mac Gryder Gallery in New Orleans described his art as “fundamentally optimistic,” suggesting “a fullness rather than emptiness of spirit” and “deep affection for his subjects.”

Such words define for me Rolland’s generosity of spirit, not just in his paintings but for his community as well.

Ben Hillyer is the news editor of The Natchez Democrat. He can be reached at 601-445-3549 or by email at ben.hillyer@natchezdemocrat.com.

Judicial system unfair to victims and their families

Sheriff: Reasons why dispatch should be its own entity

Get ready to vote, Mississippi!