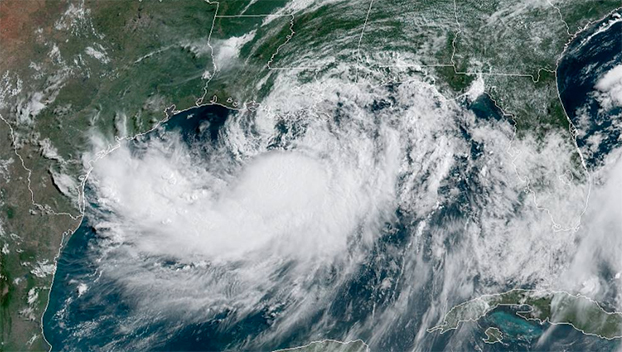 NEW ORLEANS (AP) — The National Weather Service in New Orleans says water is already starting to cover some low lying roads in coastal Louisiana as Tropical Storm Barry approaches the state from the Gulf of Mexico.

In a Friday morning tweet, the weather service says tides are rising and water levels are expected to peak Saturday.

The slow-moving storm is prompting fears of flooding in the region.

Forecasters say there’s still a chance Barry will strengthen to a hurricane for a short time as it comes ashore on the Louisiana coast, where hurricane warnings are in effect.

National Hurricane Center director Ken Graham says people should be concerned even if Barry comes ashore as a tropical storm instead of a hurricane because its slow movement will bring hazardous drenching rain either way.

Barry is slowly churning off the Louisiana coast as communities from the coast to New Orleans keep a close eye on its predicted path.

In a Friday morning advisory, the hurricane center said Barry’s maximum sustained winds have increased to near 65 mph with additional strengthening expected before landfall.

A storm surge warning has been issued for Lake Pontchartrain and eastward to Biloxi, Mississippi.

The slow-moving storm is prompting fears of flooding in the region.

Hurricane warnings are in effect along the Louisiana coast. The storm’s center is expected to come ashore Saturday.

NATCHEZ — A U.S. Immigration and Customs Enforcement spokesperson confirmed seven people are in a hunger strike at the... read more