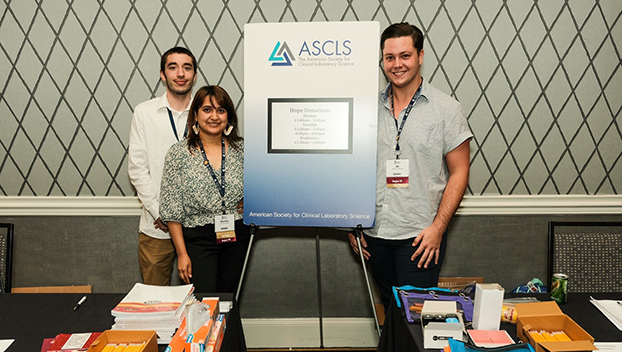 Pictured on the right is JD Hollowell, a senior medical laboratory science student at the University of Louisiana at Monroe and Natchez native, at an American Society for Clinical Laboratory Science conference in Charlotte, N.C., with two fellow officers. To the left is Jonathan Meyer from Philadelphia, Penn., and to his right is Monika Paneru, a fellow ULM student from Nepal. (submitted)

NATCHEZ — James David “JD” Hollowell, a senior medical laboratory science student at the University of Louisiana at Monroe and Natchez native, is not only interested in saving lives.

Hollowell also found a way to inspire high school students to do the same.

Hollowell, the son of Donnie Hollowell and Angie Cullum, said his passion for medical laboratory science began at Copiah Lincoln Community College in Natchez, where he became fascinated by the study.

“It’s like solving a puzzle,” Hollowell said. “You are working to solve a mystery in a sense, but in the end, you are actually helping a patient. It’s not just a tube of blood. There’s a person’s life attached to it, and that means something.”

Hollowell graduated from Co-Lin in 2016, ventured on to ULM and became a Louisiana officer for the American Society for Clinical Laboratory Science, a program that introduces younger students to his particular branch in the medical field.

Last month, Hollowell received a $500 travel grant to attend an ASCLS conference in Charlotte, North Carolina, where he earned the title of National Vice-Chair of the ASCLS Developing Professionals Forum.

As such, it is now Hollowell’s job to recruit high school students who are interested in getting into the medical laboratory science study, which is essentially “the diagnostic side of healthcare,” Hollowell said.

“There is a huge need for people in this field across the country,” Hollowell said, “and it’s a great opportunity for students. … You work in the laboratory of hospitals, run tests and ultimately give the diagnosis. … Most people going into the medical field want to be doctors or nurses, but there’s so much more that goes into it than that.”

Hollowell said he would have the opportunity to become a trailblazer for students in high schools across the state and host events and presentations with hands-on activities.

“We’ll be doing that this entire school year and some recruitment programs during the summer as well,” Hollowell said. “I’ll be a part of the ‘Browse on the Bayou’ event that we do here at ULM where we introduce high school students to programs we have on campus.”

As an ASCLS officer, Hollowell said he will also have the opportunity to travel to Washington D.C. and attend business symposiums at the capital.

After helping other students discover their passion for medical laboratory science, Hollowell said he plans to graduate from ULM in May 2020 and go on to practice in Louisiana.

Your support is needed for NACHS expansion